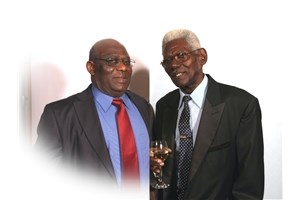 As we mark Black History Month, Merseyside’s Police Commissioner is celebrating the work of two ‘trail-blazing’ Independent Custody Visitors, while encouraging others to join the scheme.

Ebenezer ‘Ben’ Quartey and Herbert ‘Herbie’ Higgins were two of the founding members of Merseyside’s Independent Custody Visiting (ICV) scheme when it launched in 1985. The voluntary scheme was established following the recommendation of Lord Scarman after the Brixton riots that lay visitors should attend police custody suites.

As a result of the release of the Scarman Report in 1981, Ben and Herbie worked alongside Chairman Rev. Peter Beaman to help establish the scheme in Merseyside and were among the first members of the community to go into police custody suites to check on the conditions and make sure those being held are being cared for appropriately.

The scheme is now the responsibility of Police and Crime Commissioners (PCC) and Merseyside’s PCC Jane Kennedy has today paid tribute to both men, as she encourages more people to volunteer to join this important scheme.

Jane said: “As we celebrate Black History Month and as National Inclusion Week draws to a close, I want to celebrate the work of two trail-blazing ICVs and encourage other people to join this important scheme to increase the diversity within our amazing group of volunteers.

“Both Herbie and Ben helped establish the ICV scheme in Merseyside, laying the foundations of an initiative which has now run for 35 years, ensuring the welfare and wellbeing of many thousands of detainees.

“Herbie was born in Jamaica and was part of the Windrush generation who came here to settle. He met a great deal of opposition and discrimination in his early days, but Herbie remained in Liverpool and made his own distinctive contribution to many aspects of community life, for which he was awarded an MBE. His enthusiasm and commitment to custody visiting was always commendable.

“His funeral was attended by 2,000 people and led by the High Commissioner for Jamaica in Liverpool Cathedral and since his death a housing development in Toxteth has been named in his honour.

“Ben, who came to Liverpool from Ghana, has been a committed and caring member of the ICV scheme for an astonishing 35 years now. His earlier visits included checks at the Victorian police station, the Main Bridewell in Cheapside in Liverpool, which closed its doors in 1999.

“As well as making a significant contribution to the ICV scheme, he has also played an important role in the Ghanaian Association and the wider Merseyside community. His knowledge, wisdom and practical help has been greatly valued by the scheme throughout his long service.

“Both Herbie and Ben are pioneers, who have been pivotal in helping give our communities confidence that someone is checking on the welfare of detainees in police custody

“The power of arrest and detention is a significant one and detainees are potentially vulnerable. It is vital that the public know that all is well with the way we detain men and women in our justice system, a system of which we are rightly proud.

“I am keen to increase the diversity within our ICV scheme, so we can further cement that community confidence. I hope Herbie and Ben’s stories will inspire people from all walks of life and from all of Merseyside’s varied communities to volunteer to carry out this important public duty.”

ICV volunteers visit the region’s custody suites in pairs, at varied times of the night and day, throughout the year. Once on site, they check on the welfare of those detained and the conditions within the suite and produce a report for the Police Commissioner. They can also raise issues directly with Merseyside Police.

The deadline for applications is 5pm on 14th October 2020.

Find out more and apply to be an ICV.