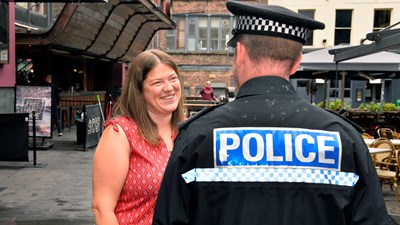 Merseyside’s Deputy Police Commissioner is inviting people living in Heswall to come and talk to her about their policing and community safety concerns as she visits the town’s newly-opened Community Police Station.

Cllr Emily Spurrell will join members of Merseyside Police’s local policing team at one of the inaugural surgeries at the Force’s newest Community Police Station in Heswall Library. The session will give Emily the opportunity to meet residents face-to-face to discuss issues in their area and encourage people to use the new community facilities.

The Community Police Stations is the sixth to open its doors on the Wirral and is designed to be an accessible, visible centre which gives local people access to their neighbourhood police team in a busy, centrally-located base, housed within the library, on Telegraph Road. The building also houses the community’s One Stop Shop, where residents can access a range of services from Wirral Council, including applying for benefits, paying subscriptions and seeking advice.

Community Police Stations are a key element of the Police Commissioner, Jane Kennedy’s 10 year plan to update and modernise the Force’s ageing estate, saving money on the Force’s annual running costs which can be directed straight into the frontline.

Emily said: “The Commissioner has made maintaining a visible and accessible neighbourhood policing style as one of her policing priorities, and Community Police Stations are an integral part of delivering on this pledge.

“We know the value that people put on being able to see and meet with their neighbourhood policing team and Community Police Stations are designed to put those teams right at the heart of the communities they serve. By holding regular surgeries, members of the public have the opportunity to pop in and discuss their concerns and share their views with their local team in a convenient location.

“For really effective policing, it is vital to gauge the views of the public and I am delighted to be joining the team in Heswall for one of the first sessions in the new Community Police Station. It’s my job to work with the Commissioner to hold Merseyside Police to account and I would encourage people to come and tell me what they think so I can make sure their voices are heard.”

The surgery will take place at:

The Community Police Stations will be open on a regular, but not continuous basis and will include public meeting rooms and facilities from which officers can parade on. It will not house any custody suites or cells. Surgeries will be publicised at the centre, on local billboards and through the Force’s social media accounts.

Merseyside Police’s Community Policing Inspector Georgina Minnery said: “We are delighted that this new Community Police Stations is now open and will be soon be welcoming people.

“The regular surgeries will give the residents of Heswall an new, open and welcoming forum in which they can raise and discuss issues that really matter in their community. Our local policing officers will be on hand to listen, and to provide advice and reassurance.

“The more we hear from our communities, the more effective our response will be, in tackling the wide variety of issues impacting upon people across Wirral.”

Community Police Stations are already open on the Wirral in Hoylake, Moreton, Rockferry, Laird Street and Birkenhead, as well as further afield in St Helens and Maghull.