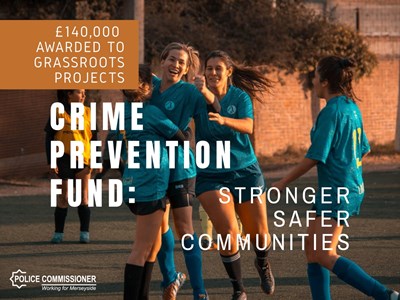 Grassroots projects which work to prevent young people from getting involved in crime have scooped the lion’s share of a £140,000 funding pot aimed at building stronger, safer communities.

Eleven projects which focus on raising the aspirations, skills and goals of young people were among the 14 successful initiatives to be awarded grants from the latest round of the Police Commissioner’s Crime Prevention Fund.

Jane Kennedy established the fund in 2014 and this is the fifth time the Commissioner has invited organisations to apply for a vital cash boost of between £5,000 and £25,000 for initiatives which aims to cut crime, protect neighbourhoods and prevent problems before they occur.

A total of 61 applications were received, with requests for funding totalling more than £840,000 and, following an independent assessment panel, the Commissioner can now announce the 14 successful organisations. They include four boxing clubs in Liverpool, Knowlsey and the Wirral and a number of arts, media and sporting projects working with young people, as well as several well-known youth centres.

Jane said: “There was a fantastic response to my invitation to bid for funding. The number and quality of the bids I received demonstrates the passion and dedication among community groups across Merseyside who wish to prevent crime and keep their areas safe.

“Unfortunately, I can only support a small number of these fantastic initiatives, but I believe the projects which have been awarded funding will be able to use these small grants to make a big difference.

“Many of these projects focus on supporting, advising and guiding young people away from making poor life choices to make sure they have a brighter future. Not only does this potentially save a young person from a life of crime, it can have a huge benefit for their family, make the community a nicer place to live and reduce the demand on the police and other public services.

“It is also important to recognise that many of these young people may be coerced, groomed or exploited into carrying out criminal activities on behalf of others and they need our support to take them away from danger and ensure they can enjoy their childhoods and look forward to the future.

“As always, I’m looking forward to watching the progress and achievements of these projects over the next 12 months.”

Among the successful recipients are Kirkdale Neighbourhood Co. Ltd who have been awarded £12,000 to develop new grassroots projects aimed at combating territorialism and gang culture in North Liverpool. This work will focus on bringing young people from different areas together to build relationships and friendships, including through activities such as army boot camp courses, tough mudder events and knife crime awareness sessions.

Well-respected community centre in Knowsley, Centre 63 have received £9,000 of funding to reach out to young people involved with or at risk of getting involved with crime, by encouraging them to access services, while community-interest company Conquer Life have been granted £8,000 to fund youth workers who will work in some of the region’s most deprived neighbourhoods to build relationships with potentially vulnerable young people. Working with Merseyside Police, they will target hotspot areas and encourage young people to get involved with their ‘Vibe’ youth project which aims to improve their lives by motivating and encouraging them, while teaching them new skills.

Also among the successful organisations were the Royal Court Liverpool Trust who were awarded £20,000 to continue to tour their two hard-hitting dramas, Terriers and ‘Eve’s Story’, which deliver powerful performances to raise awareness among young people of serious issues include guns and gangs, knife crime and sexual and criminal exploitation. Anfield and North Liverpool boxing club, Golden Gloves in Toxteth and Kirkby and Wallasey Amateur boxing clubs were also among the organisations awarded funding.