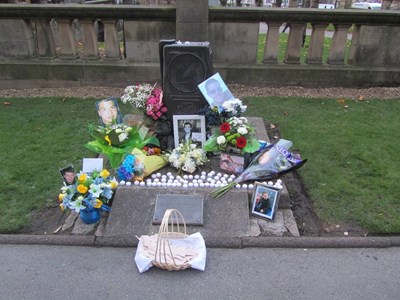 A virtual service to remember those who have died or been injured on our roads will be held in Liverpool this weekend.

RoadPeace NorthWest has organised the event as part of the charity’s World Day of Remembrance for Road Traffic Victims. There is an invitation to all those who have been bereaved or injured through road crashes, together with those who support them, to join the remembrance.

In previous years the ceremony has taken place at St George’s Hall. This year, due to the Covid-19 restrictions, it will take place online at 2pm on Sunday 15 November and can be watched on YouTube at this address: https://www.youtube.com/watch?v=nef-ezIzRSA&feature=youtu.be

During the service’s act of remembrance, photographs and tributes of loved ones will be shown and Chris Boardman with other bereaved members of RoadPeace NW will reflect on the loss of their loved ones.

The event in Liverpool is one of many taking place across the globe as part of RoadPeace’s World Day of Remembrance for Road Traffic Victims. It was first introduced by RoadPeace in 1995 and quickly spread to other European countries before being adopted as a worldwide remembrance by the United Nations in 2005 the year in which Liverpool City Council provided the memorial to road crash victims in St John’s Gardens, sculpted by Tom Murphy.

Pauline Fielding, from Liverpool, organises the annual event for RoadPeace, where she turned to for support after her son Andrew was killed in 1994 at the age of just 18, in a crash caused by a driver who did not stay at the scene and who has never been traced.

She is now a trustee of the charity and says the service, which will be led by the Rector of Liverpool, Revd Dr Crispin Pailing, is a poignant way for people to pay tribute as well as raising awareness of how dangerous driving costs lives.

Pauline Fielding said: “We invite all those who have been bereaved or injured in road crashes, together with those who support us, to join us for this event. In every death, there are so many people affected and this service offers the families and friends of those who have died or been injured the opportunity to remember their loved ones.

“It is also a chance for us to give thanks to the emergency services for their support and to highlight this unacceptable death toll and reflect on what can be done to prevent further tragedies.”

Merseyside’s Police Commissioner Jane Kennedy said: “World Day of Remembrance for Road Traffic Victims is an important opportunity for us to remember those who have been killed or seriously injured on our roads.

“Each and every crash has devastating consequences for so many people. We may not be able to meet in person this year, but this online service is a chance to show our support to those whose lives have been changed forever.

“The sad fact is that many crashes are avoidable. I am committed to reducing the number of people killed or seriously injured on the roads of Merseyside, so on this important day I will also be reminding everyone to take care when using the roads.”

Lord Mayor of Liverpool Cllr Anna Rothery, said: “Each year at this time our city remembers those who have had their lives cut tragically short as the result of being involved in a road traffic accidents. Of course, for the families and loved ones of these victims, every day is remembrance day. This year’s event is made even more poignant by the fact that we are in the middle of a pandemic. We may not be able to give a hug or put a hand of support on someone’s shoulder, but we can still come together as a city in solidarity with those who continue to suffer the grief of a loved one lost before their time.

“What we can do as a city and as a community, is make every effort to rid our roads of these horrific incidents once and for all. We need to continue to educate all road users about their responsibilities and the potential dangers they face. The annual service of remembrance is a timely reminder of this.”