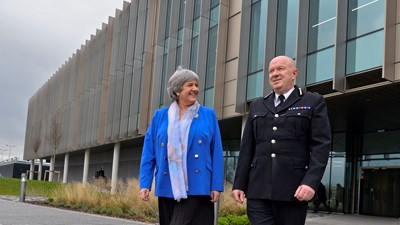 The Operational Command Centre in Speke houses more than 1,200 officers and support staff and enables the teams who make up Merseyside Police’s Matrix Serious and Organised Crime Portfolio to be based together under one roof.

The purpose-built centre on the Estuary Business Park took just two years to complete and was handed over on time and on budget by construction and infrastructure company Morgan Sindall in January. Since then staff have migrated from a number of buildings across the police estate into the new centre dedicated to tackling serious and organised crime.

Two Merseyside Police officers on horseback, wearing full regalia, will provide a guard of honour to welcome the Lord-Lieutenant, Mark Blundell, and local dignitaries who are attending the opening today.

Merseyside’s Police Commissioner Jane Kennedy and Chief Constable Andy Cooke will formally welcome the guests and invite the Lord-Lieutenant to officially open the building. Guests will then be taken on a tour of the building and have the opportunity to meet some of the teams who work from the new centre, including the dog team who are based in specially-built kennels.

Two rooms within the new centre have been named in honour of Merseyside Police officers who have been killed in the line of duty, PC Dave Phillips and PC Raymond Davenport. PC Dave Phillips died in Wallasey while attempting to stop a stolen car in the early hours of 5th October 2015. More than 34 years earlier, PC Davenport was killed as he tried to stop a stolen car on Roe Street in Liverpool on July 4th, 1981. The families of both men are due to attend the opening.

The centre, which is bounded by Speke Hall Avenue and Leeward Drive, is an integral part of the Commissioner’s 10-year strategy to reduce the annual running costs of the police’s buildings by £2.5m, and at the same time modernise and update Merseyside Police’s station and facilities.

The centre has been part funded by capital specifically ring-fenced for the Force’s buildings and part borrowed from approved sources, in accordance with the Prudential Code for capital finance. This money is completely separate from, and cannot be diverted to, the funding used to pay for Merseyside Police’s officers and staff.

Merseyside’s Police Commissioner Jane Kennedy said: “I’m so pleased that we are now in a position to officially open the new Operational Command Centre and I’m delighted that the Lord-Lieutenant is able to give his time to carry out the official unveiling today.

“The opening of this centre is a major success story for Merseyside Police as it brings the officers and staff who make up the Matrix team under one roof in a purpose-built centre which equips them to tackle crime now and in the future. These teams lead the fight against the organised criminal gangs who bring the most violence, fear and misery to our communities.

“The new centre will save costs by enabling the Force to release a number of small, leased buildings which are scattered across Merseyside and are no longer up to standard. This will reduce Merseyside Police’s annual running costs, ensuring funds can be redirected towards frontline policing.

“I would like to thank everyone who has worked so hard on this project since 3rd November 2015, to turn our plans into reality and transform what was a muddy field into this fantastic centre which I am sure will be a real asset to Merseyside Police.”

Work on the £48m centre officially began on March 22nd, 2016, after the Commissioner joined with then Chief Constable, Sir Jon Murphy, and Mayor of Liverpool Joe Anderson to ceremonially turn the first sod. In March last year, the Commissioner and Chief Constable Andy Cooke returned to the site for a traditional ‘topping out’ ceremony, which saw the last concrete pour go into the top level of the main structure to mark the end of the main construction phase.

Chief Constable Andy Cooke QPM said: “I am delighted that we are now officially opening this fantastic building.

“The OCC is a huge part of Merseyside Police’s commitment to providing a police service fit for present and future challenges, giving our officers and staff the facilities and equipment to serve our communities.

“The OCC has seen a number of essential departments being brought together under one roof as one team, all made possible through funding specifically ring-fenced for the Force’s buildings, and which will reduce the Force’s overall running costs.

“Our relocated staff can now continue their excellent daily work in tackling serious and organised crime across Merseyside.”

As well as the main building, the 11.4 acre site includes a separate, single-storey building which will provide administration and support services and further smaller buildings including a dog kennels, a fuel station and a gatehouse on Leeward Drive. The buildings have all been designed to meet the latest standards in energy efficiency, including LED light throughout and solar panels on the roof to make sure it is as cheap as possible to run. It was assessed by city council planners as “well designed to be interesting architecturally and to preserve and enhance its ecological value in a landscaped setting”. The site will also provide car parking and land for dog exercise and training.

The Operational Command Centre was also a hub of learning and development during its construction, with an estimated 2,500 people mostly from the local area working on the site, including more than 38 apprentices and graduates from local universities and colleges.

A key consideration during the creation of the new Operational Command Centre was how the project could benefit the local community, while ensuring it was as environmentally friendly as possible. Take a look at just a few examples of how this was achieved: