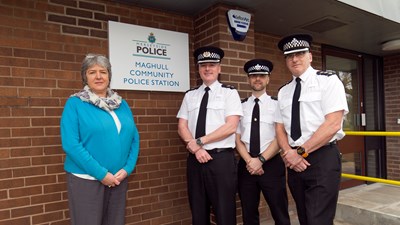 The proposal to co-locate the new Community Police Station in the Town Hall on Westway, was first suggested to the Commissioner by council leaders during the initial consultation on her plan to modernise Merseyside Police’s stations in order to cut costs back in 2014. Work officially began last September after planning permission for alterations to the property was granted.

Today, the Commissioner will be joined by Bill Esterson MP, Merseyside Police’s head of Local Policing, Chief Superintendent Jon Roy, Area Commander Superintendent Matt Boyle, Town Council leader Patrick Mckinley, Deputy Leader John Sayers and members of the town council to officially declare the station open for business. Members of the team will also be on hand to meet members of the public who wish to come and visit the new station.

Community Police Stations are designed to be accessible, visible centres which are co-located with partners in busy neighbourhood hubs which are already well-used by the communities they serve. They are a key part of the PCC’s strategy to transform Merseyside Police’s stations with the aim of saving £2.5m on running costs every year, money which can be redirected straight into frontline policing.

Jane said: “I’m delighted that we are now in a position to open the doors to Sefton’s very first Community Police Station here in Maghull and my thanks to Bill Esterson for giving his time to officially cut the ribbon.

“Maghull Town Hall is an excellent location for this Community Police Station. It is centrally located and will see the policing team based alongside councillors, council workers and a host of voluntary groups which serve the local community.

“This new Community Police Station will put the neighbourhood team right at the heart of the community in a busy location which is well used by the community and which has been recommended by local councillors. It is clear that people in Maghull are thrilled at the prospect of having their local officers and PCSOs at their community centre on a regular basis.

“I am very grateful to Maghull Town Council for so enthusiastically engaging with the plans to make Merseyside Police more accessible and for helping this new station to become a reality. It is a real example of what can be achieved in partnership for the benefit of our communities. I hope this Community Police Station will bring officers and PCSOs closer to the people they serve and be a real asset to the community.”

Bill Esterson MP said “Thank you to Maghull Town Council and to Merseyside Police for recognising the importance to people in Maghull and Lydiate of having a community police station for residents.

“It is very important that we feel safe and can speak to a uniformed police officer when we have concerns. Using Maghull Town Hall as a Community Police Station makes sense as the facilities were not being used.

“Merseyside Police has had some of the biggest cuts anywhere in the country since 2010. I believe those cuts were a big mistake and that those who supported the cuts were wrong. So it is to the credit of Police and Crime Commisioner, Jane Kennedy and Town Councillors McKinley and Sayers that this facility is available to help neighbourhood and community policing. Jane Kennedy is absolutely right to insist that community policing is protected as it plays a vital role in preventing crime and in reassuring residents. The police have a very difficult job to do with dramatically fewer officers. Congratulations are therefore due to everyone who has played a part in opening the facility in Maghull.”

Merseyside Police’s Area Commander for Sefton, Superintendent Matt Boyle said: “Community Police Stations are designed to be at the heart of our neighbourhoods and I’m proud to be part of the official opening of our new facility in Maghull.

“The station will give our local policing teams, other members of our organisation and partner agencies the accessibility to work alongside one another in a central location of an area where the community needs it most.

“I hope this shows the public that we are continually looking to increase our visibility within our communities should they have any issues. But most importantly, I hope this station will allow our own officers and staff to spend more time out and about, talking to the public, building positive relationships and supporting them the best we can.”

The Community Police Station in Maghull will be open on a regular, but not continuous basis and will include public meeting rooms and facilities from which officers can parade on. It will not house any custody suites or cells. Surgeries will be publicised at the centre, on local billboards and through the Force’s website.

Leader of Maghull Town Council Cllr Patrick McKinley said: “When we first heard that the Police were looking to locate a Community Police Station in Maghull both myself and my colleague John Sayers lobbied hard to bring this exciting development to our town.

“We feel it is a win win situation as it will bring policing closer to the local community. Residents will have direct access to police officers in a way that hasn't been possible since the police station in town centre closed.

“There will also be a large increase in passive policing as officers use the community station. We look forward to building on existing relationships and developing much closer relationships with all of our local police.”