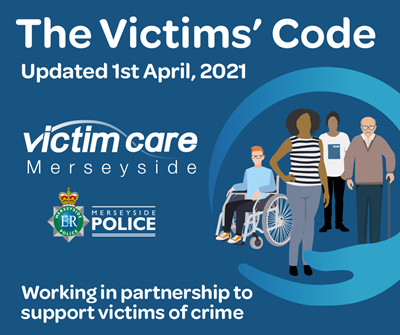 Twelve new rights for victims of crime have been introduced today, following an update to the Victims’ Code which sets out the services and standards that must be provided to victims by the police and other criminal justice agencies.

The Code of Practice for Victims of Crime, more commonly known as the Victims’ Code, is published by the Ministry of Justice and it’s applicable from the moment a crime is reported to the end of a trial in court.

Chief Superintendent Ngaire Waine, Head of Criminal Justice at Merseyside Police said: “The force welcomes these latest changes to the Victims’ Code. Supporting victims is incredibly important and we are pleased that the code now simplifies and strengthens the previous entitlements with rights that are clear, concise and easy to understand.

“Being a victim of crime can be an upsetting and sometimes life-changing experience. Thankfully, there are lots of local and national organisations that offer a wide range of support services for victims.”

Merseyside’s Police and Crime Commissioner, Jane Kennedy said: “Victims of crime deserve the best possible care to help them cope and recover after their ordeal.

“The introduction of a new, simplified Victims’ Code of Practice which makes the rights of victims clearer and easier to understand is very welcome and I’ve been working with Merseyside Police to ensure that, from April 1st when it comes into effect, every victim of crime will be told about the new code and know their rights and entitlements.

“This is essential if victims are to feel fully involved in the criminal justice process and to ensure they get the service and support they need. It is also important in ensuring victims know where to turn if they do not feel they are getting the service they should.

“Promoting the new code also gives us a welcome opportunity to remind victims about the help and support that is available to them in the aftermath of a crime here in Merseyside, both through the Victim Care Merseyside services I commission and a dedicated victims’ website, www.VictimCareMerseyside.org, which has recently been completely refreshed and updated.

“This website is a one-stop shop of information and advice for anyone affected by crime and it also contains a directory of more than 70 services working in Merseyside offering support to victims and I would urge anyone seeking help after a crime to visit it at www.victimcaremerseyside.org.”

“We put the needs of our communities first in everything we do and the force is committed to ensuring victims are fully supported and kept informed at all stages of a case. We actively seek ways to enhance victim care and we’re pleased to now be introducing contact cards and victim information leaflets which will be given to victims when an officer first attends the report of a crime.”

The new cards allow officers to provide the victim with a reference number and a clear point of contact for enquiries about their case.

The new leaflet contains a lot of useful information. This includes an overview of the next steps following the crime being reported, plus information about the victim’s rights, compensation, the Right to Review scheme and the role of the Witness Care Unit. There is also a list of telephone numbers for a variety of victim support services including a section specifically relating to domestic abuse.

Victim Care Merseyside is a dedicated support resource for victims of crime, commissioned by Merseyside’s Police and Crime Commissioner. The website has a comprehensive directory of services available to victims throughout Merseyside. Victims can easily find specialist support in their local area that can help them cope and recover from the aftereffects of a crime. You can visit it at www.victimcaremerseyside.org

The Victims’ Code originally came into effect in 2006 as part of the Domestic Violence, Crime and Victims Act 2004.  It built on the support for victims within the Victims’ Charter which was introduced in 1990 and set out for the first time, the levels of service victims of crime should expect. The Code was updated in 2013 and again in 2015.

In 2018, the government published the Victims Strategy, setting out its vision for victims of crime and marking an important milestone in criminal justice reform.

The aim is to create a justice system that supports even more victims to speak up by giving them the certainty that they will be:

The new Victims’ Code was published in March 2020, providing victims of crime with 12 overarching rights that are clear, concise and easy to understand.  Two consultation periods followed and in November 2020, the Ministry of Justice laid the revised Victims’ Code with an implementation date of 1 April 2021.

This is a milestone in criminal justice reform and it is expected to pave the way for a Victims’ Law.