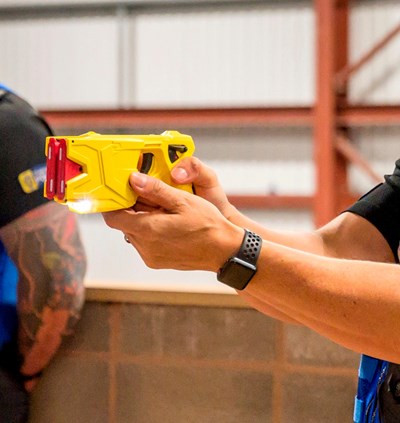 Merseyside Police has been granted more than £250,000 for additional Tasers for its officers from the Home Office.

The bid, which was submitted by the region’s Police and Crime Commissioner Jane Kennedy in February, requested funding for 310 devices from a ring-fenced fund aimed at increasing the number of officers carrying Tasers nationally. The Home Office has now confirmed that the Commissioner will receive her full request of £255,750 to pass on to the force over the next two years.

The award comes as part of a national uplift which has seen 41 forces awarded a share of £6.5m to purchase new devices. This means that across England and Wales, 10,000 more officers could be equipped to carry Tasers.

Jane said: “I have always fought for more funding for Merseyside Police so I am pleased that the Home Office has granted our full request this time.

“It is only right that the officers of Merseyside Police have the equipment they need to keep our communities safe and to protect themselves as they go about this work. Tasers are a well-proven tactical option available to police officers when they are in potentially dangerous and violent situations and I welcome the fact that more officers, who are assessed by the Chief Constable as needing Tasers, will have them available to them in the future.

“This is particularly crucial given the Chief Constable and I have recently confirmed our plans to accelerate recruitment to bring 500 new officers into training over the next year. While these officers will not be ready to use Tasers immediately, it will ensure this essential equipment is on hand once they are appropriately trained to use them, thereby supporting our expansion plans.”

Police and Crime Commissioners were invited to submit bids into the total fund of £10m, ring-fenced for Tasers, by February 4th. Applications were based on the challenges in each area and, within the bid, the Commissioner explained how many additional officers the force expects to train to use Taser. From the grant, £150,000 was allocated to training for Taser instructors.

A recent Police Federation of England and Wales survey found 94% of officers think Tasers should be issued to more frontline staff.