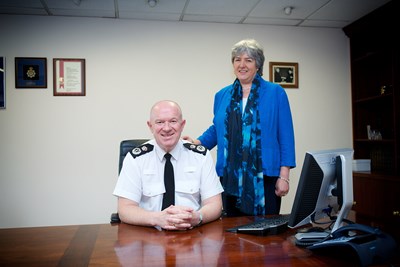 Merseyside's Police Commissioner and Chief Constable have today praised officers and staff for all their hard work following publication of Her Majesty's Inspectorate of Constabulary and Fire & Rescue Services (HMICFRS) PEEL (Police Effectiveness Efficiency Legitimacy) assessment for the financial year 2018/2019.

For the fourth time running the force has maintained its "good" grading.

In terms of its effectiveness in general, the force is good at reducing crime and preventing offending, good at investigating offending and good at tackling anti-social behaviour, whilst it has maintained its outstanding rating for tackling serious and organised crime. The efficiency with which the force carries out its responsibilities is good; and the force is achieving fairness and legitimacy in most of the practices that were examined this year.

Following publication of the Peel Assessment, Merseyside’s Police Commissioner Jane Kennedy said: “I congratulate Merseyside Police on another strongly positively report released today by inspectors from HMICFRS. This report is particularly significant given inspectors took the decision to carry out one combined report reviewing the force’s overall effectiveness, efficiency and legitimacy.

“It is clear that inspectors found what I see on a daily basis as I work with Merseyside Police; that the force delivers its core business of keeping people safe and reducing crime effectively, that it is committed to the care and protection of vulnerable people and that there is a deep-rooted culture of treating people with integrity and fairness.

“I’m pleased the inspector highlighted the force’s ongoing efforts to understand the demands it faces and prepare for the future, including in investing in new technology. It is also clear that Merseyside Police has made every effort as an organisation to continue to develop, even as it has shrunk in size and reduced in workforce. This is an assessment of which Chief Officers should take great pride.

“This is a huge achievement, particularly given how severely the force has been affected by cuts during the last 10 years. It is testament to the dedication, professionalism and commitment of the men and women who work so hard to keep the communities of Merseyside safe.”

Chief Constable Andy Cooke, said: "We are wholly committed to providing our communities with a police service they can have confidence in.

"The assessment of good across all three categories is testimony to the quality of the officers and staff we having working for us and is reflective of their commitment to keeping our communities safe.

"The hard work of our officers and staff across the board has resulted in our ability to maintain an outstanding grade when it comes to tackling serious and organised crime. In the last year, as a result of their continued efforts, we have seen a number of organised crime groups sentenced to more than 400 years for firearms and drugs offences. These people through their use of firearms and the supply of drugs do untold harm within our communities and we will continue to take positive action against those involved in serious organised crime.

"We are determined to continue to provide the communities of Merseyside with a professional police service that cares, listens and delivers."