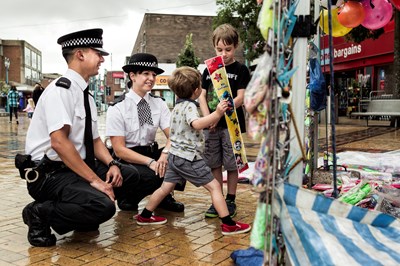 To kick off 2021, a new policing team in Kirkby has been launched to assist in cutting crime and arresting criminals in the area.

The new policing team, headed up by Inspector Dave Morgan, will be an addition to an already well-established local policing team here in Knowsley.

Inspector Dave Morgan said: “I am looking forward to working with a really keen group of officers and PCSOs as well as continuing to build on partnerships across the borough in order to support all those living, working and visiting Kirkby.

“During these difficult times, it has become apparent that now, more than ever, we must continue to take a proactive approach to tackling crime meaning stepping up patrols, conducting more open land searches, road side operations, warrants and utilising alternative resources including quad bikes and our mounted team.

“As a result of this new team, other police resources in Knowsley will be tasked more widely across other areas, meaning all residents will see the benefit of the new Kirkby team.”

The funding for the new team comes from central Government who in 2019 announced their intention to recruit 20,000 new police officers into the UK police service over a three-year period. Merseyside Police will be able to recruit 660 new officers.

Merseyside’s Police Commissioner Jane Kennedy said: “I’m delighted to welcome the introduction of an expanded local policing team which will be dedicated to working in Kirkby.

“The Chief Constable and I promised that we would accelerate the recruitment of new officers over the last year as local people agreed to pay more to support the police budget. We have now delivered those new police officer posts. We know how important local policing teams are to our communities and, by March, we will have 500 new officers across Merseyside, keeping residents in Kirkby and across the whole of the region safe.

“Working with Knowsley Council’s Crime and Communities Team and with all community safety partners in the town, I’m sure this new team will make a difference to people living and working in Kirkby, and I look forward to seeing them at work.”

Cllr Shelley Powell, Knowsley’s Cabinet Member for Communities and Neighbourhoods said: “At Knowsley Council, we are dedicated to ensuring the safety and wellbeing of our residents and have invested in resources that support this. This includes the Crime and Communities Team – a team of officers who work with key partners including Merseyside Police to tackle incidents of criminal and anti-social behaviour.

“The introduction of the new Kirkby Team, and resulting policing uplift across the whole of the borough, is fantastic news and we’re delighted to have this additional resource for Knowsley. We look forward to starting work with the team in the new year.”

If you know someone involved in crime, please report it to us via our website, social media or calling 101.

How can we make Merseyside even safer?

Merseyside’s Police Commissioner is asking for your views on how we can make Merseyside even safer.

Emily Spurrell wants you to share your opinions on policing and community safety with her through her Safer Merseyside consultation.

Your views will be the backbone of her spearhead document, Merseyside’s Police and Crime Plan, which will set the policing and community safety priorities for the region for the next three years.