Partners join together in day of action in Knowsley 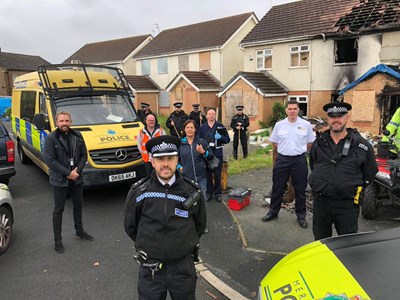 Members of the Police Commissioner's team joined police officers, representatives of Knowsley Council’s Crime and Communities, Environmental Health and Street Scene Teams, Merseyside Fire & Rescue Service and British Gas to conduct a day of action in Knowsley, targeting those involved in serious violence and antisocial behaviour, whilst engaging with and reassuring the public.

Partners gathered at Primrose Court, Huyton, yesterday (26th August) with the aim of providing a collective response to criminality.

Patrols were made up of officers both on foot and on the quad bikes, undertaking open land searches. A Mobile Police Station was also stationed in the area, allowing members of the public to have the opportunity to speak with the police there and then.

Chief Inspector Phil Mullally, Knowsley’s Local Policing Team said: “The local community will have noticed officers in this area regularly and we continue to be a visible presence to both tackle crime and anti-social behaviour but also to reassure the community that we’re here for them.

“I would urge the community to contact my team with information of those involved in crime and those who may be having a negative impact on the area. We’re determined to tackle community concerns in Primrose Court, working with our partner agencies to have a long-term positive impact.”

During the day of action, officers arrested a 37 year old man on suspicion of abstracting electricity and drugs offences. Officers also seized a small quantity of suspected Class A drugs.

Cllr Shelley Powell, Cabinet Member for Neighbourhoods and Communities, said: "Our message is clear – we will not tolerate crime and ASB in our borough, and this Day of Action embodies all the hard work being done behind the scenes by ourselves and partners to tackle the concerns that matter to our residents. As a partnership we have developed a strategy in order to bring about positive change and we are taking a holistic approach in order to create a safer borough for Knowsley’s residents.”

Sgt Mark Wilson, who spent the day at Primrose Court added: “Today has been a real show of partnership activity and I hope the public see us working with the local authorities and other partners as a positive tool to reduce crime in the area and increase the safety of those living there.

“Work is still ongoing in Knowsley to ensure our communities are free from harm and deployments like these will form a key part of our attempt to find those responsible for committing crime and putting others at risk.

“If you would like to get in touch because you know someone involved in crime or want to report something else to us, please DM us @MerPolCC or contact @CrimestoppersUK anonymously. Thank you to the wider public for your continued support, this is hugely appreciated and invaluable when it comes to taking dangerous people, weapons and substances off our streets.”