Merseyside’s Police Commissioner and Chief Constable will officially open a major new patrol hub for the force on a key gateway into the city today.

The purpose-built police centre, situated on the site of the old fruit and vegetable market, will provide a base for more than 700 staff, including the emergency incident response unit, targeted policing teams and the scheduled incident response teams. The opening of the new facility will enable the staff, who are currently scattered across a number of stations to be brought together under one roof, increasing efficiency and effectiveness.

The major new base, which will also house the force’s vehicle repair centre, is an integral part of a wider regeneration project aimed at breathing new life into the Edge Lane gateway into Liverpool city centre.

The centre is part of the Commissioner’s drive to put more money into frontline policing by selling old, out-dated and inefficient buildings and replacing them with more cost-effective, flexible and fit-for-purpose facilities.

The money for the project is completely separate from, and cannot be diverted to, the funding used to pay for Merseyside Police’s officers and staff.

Today, the Commissioner and Chief Constable will formally welcome guests, including Wavertree MP Paula Barker and Liverpool’s Deputy Mayor and Cabinet member for Business Economy and Skills Cllr Gary Millar, before officially opening the building. Guests will then be taken on a tour of the building and have the opportunity to meet some of the teams who work from the new centre.

Jane said: “I’m delighted that we are now in a position to officially unveil this impressive new base for Merseyside Police on Edge Lane, which has been delivered on time and actually under budget by £1.4m.

“The opening of this bespoke centre is yet another success story for Merseyside Police. It brings officers and staff together under one roof in modern, fit-for-purpose facilities which will ensure they are equipped, and in the right location, to best serve the people of Merseyside and tackle crime now and in the future.

“This major new facility, which has been built using funding specifically ring-fenced for the force’s estate, will save costs by enabling more than 700 police staff to be brought together in one central hub. This will enable the police to release a number of small, leased buildings which are scattered across Merseyside and are no longer up to standard, reducing our annual running costs and ensuring funds can be redirected towards frontline policing.

“It is vital that the men and women who work around the clock to keep us all safe have the right facilities and a suitable working environment for 21st century policing. I have worked hard to deliver that, while ensuring our buildings are more efficient, flexible and cost effective in order to save money for the frontline. 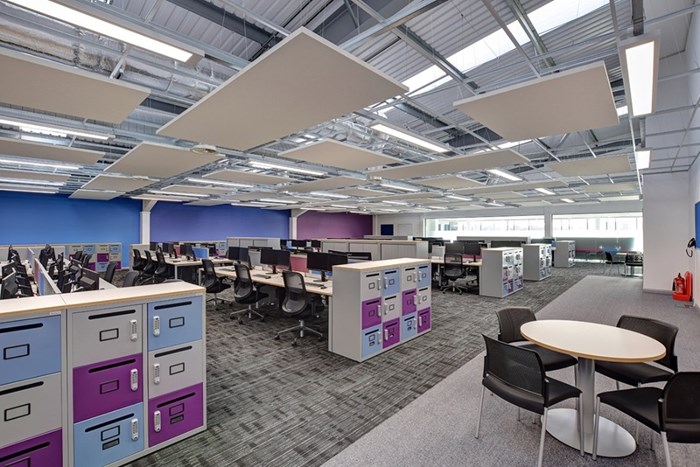 “Edge Lane really is a major gateway into the city and, having worked for many years in my previous role as the MP to encourage investment and growth in the Old Swan area, I am particularly pleased that Merseyside Police are playing a major role in helping to regenerate this part of the city.

“I would like to thank everyone who has worked so hard on this project, to bring our plans to life and transform what was a derelict site into this fantastic centre. I am sure it will be a real asset to Merseyside Police and for the whole community for years to come.”

Work on the two-story, 13,900m2 centre, which takes up approximately half the 20 acre site, got underway in August 2018. In February 2019, a ‘topping out’ ceremony was held when the final piece of steel was installed at the site before work began on kitting it out. Last November, the building was handed over on time and under budget by construction company Willmott Dixon. Since then officers and staff have been moving in from stations across the city, with all employees due to be relocated in the next month.

Chief Constable Andy Cooke said: “It’s fantastic to be able to officially open this new purpose built building, which brings the force in to the 21st Century. Through the sale of buildings, which were antiquated and expensive to maintain, and part funding we have been able to provide our officers and staff with a modern building, that is energy efficient and right in the middle of the transport links to various parts of the county.

“700 officers and staff, including the emergency incident response unit, targeted policing teams and the scheduled incident response teams will be based at the hub, which is built on the old fruit and vegetable market and is part of the regeneration and reenergising of the Edge Lane area.”

The centre is an integral part of the Commissioner’s 10-year strategy to reduce the annual running costs of the police’s buildings by £2.5m, while at the same time modernising and updating Merseyside Police’s stations and facilities. It follows on the from the opening of the £48m Operational Command Centre in Speke in November 2018, which brought all the teams which make up the Matrix Serious and Organised Crime Portfolio together under one roof.

The centre has been part funded by capital specifically ring-fenced for the force’s buildings and part borrowed from approved sources, in accordance with the Prudential Code for capital finance.

Anthony Dillon, managing director of Willmott Dixon in the North, said: “These new modern facilities for Merseyside Police are designed to create a quality and value for money environment, giving front line officers and staff the very best support they need to serve the people of Liverpool.

“It is a result of the fantastic collaborative working between the force and all project partners, that we have been able to deliver the hub both on time and under budget, and we are hugely proud of the wonderful reaction the building has had from officers and staff.”

A key consideration during the creation of the new Edge Lane patrol hub was how the project could benefit the local community, while ensuring it was as environmentally friendly as possible. This saw 99% of Willmott Dixon’s project spend awarded to businesses in Liverpool and the surrounding area, 87% being SMEs.

100% of waste on the project was diverted from landfill, with all the aggregate material on the existing site repurposed for the new hub. On Edge Lane, Willmott Dixon also created 183 apprentice weeks and school workshops for more than 300 students.

To date, across the city of Liverpool, Willmott Dixon has delivered over £90m of community and regeneration projects, with a total of £75m spent with local businesses.