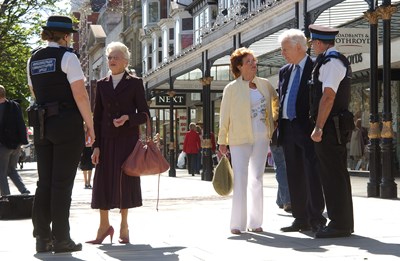 Merseyside’s Police Commissioner has revised the Community Remedy scheme which sets out how perpetrators of anti-social and nuisance crimes should be dealt with outside of court.

Jane Kennedy has published an updated Community Remedy document, which provides a list of appropriate actions that can be offered by the police to victims of low-level crime and anti-social behaviour to select as punishment for the perpetrators, when court proceeding would not be suitable.

Publication of the revised document follows a three-week consultation during which the Commissioner asked victims of crime, members of the public and community safety partners if the existing punishments on the list were still the most effective way of dealing with offenders. Those views were taken into consideration by the Commissioner and the Chief Constable of Merseyside Police, Andy Cooke QPM, when informing the final list of actions now available as Community Remedies.

Jane said: “I wanted to hear the views of people across Merseyside and those who work in our community safety and criminal justice system on how they think perpetrators of nuisances crimes should be dealt with outside of court.

“Overall, the message came back that the existing punishments for offenders offered through the Community Remedy scheme still largely fit the bill, but respondents did feel that rather than providing a written or verbal apology for their behaviour, offenders should be asked to make practical amends through constructive work to help the community.

“This is a view I support and I was happy to amend the Community Remedy scheme to incorporate this as a potential punishment that victims of low-level crimes can select in the future.

“Community remedies are designed to reduce reoffending by encouraging offenders to face up to the consequences of their anti-social or criminal behaviour, to take responsibility for their actions and to appreciate the suffering they may have caused.

“Through this consultation and review of the Community Remedy scheme I was keen to ensure the options offered in Merseyside reflected the views of the community. I’d like to thank everyone who took part in this review and I hope they will be pleased to see this document amended to reflect their views.”

Community remedies only take place in circumstances where victims are happy to be involved and in certain types of cases, such as those committed by first-time offenders who have shown genuine remorse or where an out-of-court disposal would be more appropriate than formal court proceedings.

All the actions in the Community Remedy list are designed to be appropriate and proportionate to the types of offences that are committed. Depending on the crime or incident that has occurred, a police officer will make the final decision if a community remedy is suitable. They will discuss this with the victim and the perpetrator to make sure they both agree with the approach before using the community remedy list with the victim to determine the best action to take.

Alternative punishments include taking part in mediation, the perpetrator signing an Acceptable Behaviour Contract in which they agree not to carry on their behaviour or face more severe consequences and educational or rehabilitative activities. Victims may also chose Restorative Justice, which would enable them to meet the offender to ask them to explain their actions, talk to them about the impact of their crime and ask for answers.

If the offender fails to comply with the action chosen they can face court action for their behaviour.

The Community Remedy list was introduced by the Home Office in 2014 as part of a range of measures to tackle anti-social behaviour through the Anti-Social Behaviour, Crime and Policing Act 2014.