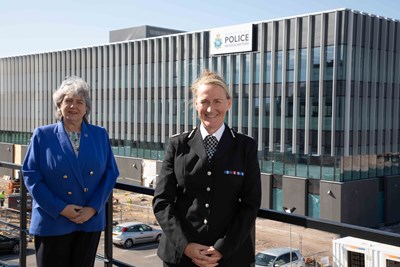 The Commissioner, Jane Kennedy, said: “Today I offer a warm welcome to Serena Kennedy as she steps into her new role as Chief Constable of Merseyside Police.

“Chief Constable Kennedy brings a wealth of experience to the role. She has been a significant part of the leadership team at Merseyside Police for the last four years which means she understands the challenges facing the Force and the complexities of policing this unique region. She is in the perfect position to hit the ground running as she takes over the reins from Andy Cooke.

“Chief Constable Kennedy has demonstrated clear strategic leadership, the highest standards of professionalism and ethical conduct, and her commitment to the Force shines through. She is the first woman to serve as Chief Constable here, which is worth marking, but that is not why she got the job. She was the outstanding candidate and that is what counts. I am in no doubt that she is the right person to ensure Merseyside Police continues to be the best performing urban force in the country, delivering the highest standards of policing for our communities.

“I look forward to working with Chief Constable Kennedy for my final month in post and I wish her every success as she continues in her role with a new Police Commissioner.”

Chief Constable Kennedy, explained: “I joined Merseyside Police four years ago and I am incredibly proud to have been given the opportunity to lead the force and build on the strong foundations laid by my predecessors.

"Merseyside Police is the best performing force in the country and I am determined that the people of Merseyside continue to have a police service that puts them at the heart of everything it does.

“When I joined the police more than 27 years ago I never thought that one day I would be a Deputy Chief Constable, let alone a Chief Constable and I am looking forward to the challenges that lie ahead and working with the fantastic officers and staff who provide a professional, effective and efficient service to the communities of Merseyside on a daily basis.

“My priorities are to ensure Merseyside Police is able to deliver an excellent service in line with the Community First principles. Working with my Chief Officer colleagues I will ensure we have the capacity and the capability within the organisation to protect people, prevent crime and pursue offenders.”

Serena, who is married to Ian and has a 34-year-old stepson and daughter-in-law, and two daughters, aged 20 and 19, and two grandchildren, continued: "Throughout my service it is the interaction with people, both inside and outside the police, which has made my career so enjoyable."