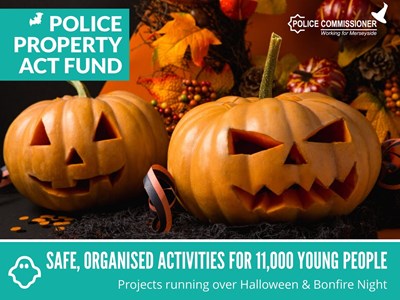 More than 11,000 young people will enjoy safe, organised activities this Halloween and Bonfire Night, thanks to funding raised by the police from the sale of stolen goods.

Merseyside’s Police Commissioner Jane Kennedy has today announced the 24 community projects that will receive a share of funding from the Police Property Act (PPA) Fund which directs money raised through the sale of unclaimed stolen goods or property recovered by the police that cannot be returned to its owners into worthwhile causes.

For the last four years, the Commissioner has used this money to help community organisations run activities and projects which keep young people safe and divert them away from getting involved in anti-social or criminal behaviour over the busy autumn period.

The successful organisations from this round of funding, totalling more than £40,000, will run a host of projects which will complement Merseyside Police and Merseyside Fire and Rescue Service’s Operation Banger plans with the aim of keeping a total of 11,061 young people engaged in safe and supervised activities.

Jane said: “Halloween and Bonfire Night are a time of fun and excitement for many people across Merseyside, particularly young people who love the festivities.

“Sadly though, it is also a time when the fun can get out of hand and lead to young people getting involved in behaviour which can become intimidating, anti-social or even dangerous to other members of the community. That means it is traditionally a very busy time for both Merseyside Police and Merseyside Fire and Rescue Service.

“By funding these youth projects across Merseyside, my aim is to help thousands of young people enjoy the festivities in a safe and enjoyable way at organised and well managed events. This will help to ensure they don’t get involved in any activities that could either put themselves or others in harm’s way. It could also prevent them from getting involved with behaviour that they may come to regret in the future.

“It will also help to relieve the strain on our emergency services during this busy period, complementing and supporting the excellent diversionary work the police and fire service already carry out while making sure people can enjoy the celebrations during the holiday season.

“For this year’s successful organisations, these small cash boosts can make a huge difference and will enable them to run some fantastic grassroots projects which really engage with young people’s imaginations while keeping them safe.”

A total of 63 applications were received for the funding, amounting to requests for more than £194,000. The bids were shared with community safety partners before being reviewed by a panel from the Commissioner’s office and the Community Foundation for Merseyside, who manage the fund on the PCC’s behalf.

As a result, eight organisations in Liverpool and six initiatives in Sefton were awarded funding, with four initiatives in Wirral and Knowsley and two in St Helens all benefitting. Much of the funding was focused in ‘hotspot’ areas where communities have been identified as most susceptible to threat and risk.

Among the successful organisations were The Hive, Wirral Youth Zone, which received £2,500 to run their annual “HiveAgeddon” project offering diversionary activities including arts, football, drama, dance, climbing and music for up to 2,500 young people during the Operation Bangor period. In St Helens, the Under Construction Crew will use £2,500 to engage young people in dance, DJing and circus workshops, while Portico Vine Rugby Club received £1,200 to host a series of cinema nights in an area of high anti-social behaviour.

The PPA fund is administered by the Community Foundation for Merseyside, (CFM) on behalf of the Commissioner. CFM holds funds from philanthropic individuals and organisations who wish to support deserving causes in Merseyside and Lancashire.

“This fund is very popular and the decision making panel had some extremely difficult choices to make with so many valuable projects presented. We feel the projects supported will make a huge impact in communities at this time of the year and wish them every success.”

For further information  on the Community Foundation please visit our website www.cfmerseyside.org.uk”