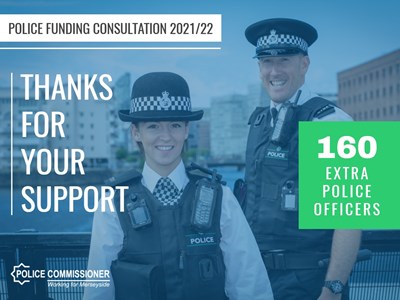 More than 62% of respondents to a public consultation have supported plans to protect Merseyside Police’s budget and ensure the recruitment of a further 160 new officers over the next year.

A total of 2,072 people responded, either online or by phone survey, to the consultation undertaken by the Commissioner, Jane Kennedy, asking whether residents would be prepared to contribute a little extra through their council tax to help Merseyside Police to continue with a police officer recruitment drive and manage increasing costs over the next 12 months, reducing the need to make cuts to services to balance the budget.

The proposal was put forward by the Commissioner after the government’s financial settlement for 2021/22 was announced in December, when ministers made it very clear they expected local council tax payers to pay more towards policing.

While the government presumed taxpayers would contribute more, the Commissioner has spent the last three weeks consulting local people to find out if they would be willing to contribute a small amount extra. The increase equates to approximately 19p a week or £10 a year for a Band A household, the lowest Council Tax category, but the amount paid by the majority of council tax payers on Merseyside.

Even after this small increase, the police element of Council Tax bills on Merseyside will still be among the lowest in the country.

Jane said: “While the Government have assumed taxpayers would be willing to pay more, I asked local people how they felt about it.

“I know this is a tough ask particularly when it’s been such a hard year for many, but as in previous years, people in Merseyside have demonstrated how much they value their local police force and how keenly they want to see more officers patrolling our streets.

“Between 2010 and 2019, the government’s policy of austerity forced Merseyside Police to make cuts of £110m. This reduced the size of the force by a quarter, meaning that by the end of the decade there were 1,110 fewer police officers working to keep us safe.

“In the last year and following the launch of Operation Uplift, the Chief Constable and I have done everything to build those numbers up again and I’m delighted to say that we have successfully recruited 500 new officers. While this is a great improvement, it still leaves the Force a long way short of the numbers it had in 2010.

“Now the public have given me their approval to continue to recruit more officers over the year ahead, I will take these proposals to the Merseyside Police and Crime Panel. If they are also willing to approve, we can push ahead with our plans to further strengthen Merseyside Police and get those 160 officers recruited, trained and put them to work preventing crime, protecting our communities and maintaining public safety.”

The Commissioner will present her proposed budget to the Police and Crime Panel on Thursday (4th February) for consideration and approval.

Due to the restrictions on gathering due to Covid-19, the PCC took the decision to carry out her consultation online and over the phone this year.

A statistically significant survey of 1,246 people was carried out over the phone, with a representative sample of respondents reflecting each local authority area, all age ranges and the region’s ethnic make up. This robust survey, which has a confidence level of 97%, showed 72% people in support of the PCC’s proposals. An additional 826 people took part in the survey online.