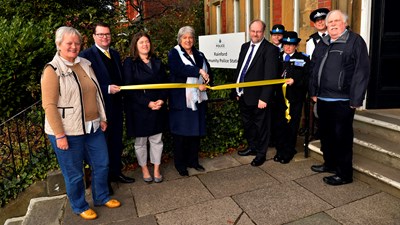 Community Police Stations are designed to be accessible, visible centres which are co-located with partners in busy neighbourhood hubs which are already well used by the communities they serve. They are a key part of the PCC’s strategy to transform Merseyside Police’s stations with the aim of saving £2.5m on running costs every year, money which can be redirected straight into frontline policing.

The proposal to co-locate the new Community Police Station with other services in the Village Hall on Church Road in Rainford was first suggested to the Commissioner by parish council leaders during the initial consultation on her plan to modernise Merseyside Police’s stations in order to cut costs back in 2014. The existing station in Rainford has been closed to the public since 2012 and will now be sold.

The Commissioner was today joined by Conor McGinn MP, St Helens Council leader Cllr Derek Long, members of the local policing team from Merseyside Police and representatives from the Parish Council to officially declare the station open for business. Members of the team were also on hand to meet members of the public who came to visit the new station.

The characterful and well-used Village Hall already hosts a range of regular community events, classes and activities, from tai chi and yoga to mindfulness classes, luncheon clubs and band workshops. It is also used for surgeries by Conor McGinn MP and the Borough Councillors.

Jane said: “I’m delighted that we have now opened the doors to this Community Police Station in Rainford and my thanks to Conor McGinn and Cllr Derek Long for giving their time to attend today.

“We are not hiding the fact that these changes are driven by austerity. Merseyside Police’s workforce has been cut by nearly a quarter since 2010 and the pressures they face continue to grow. That means the Force has to work more smartly and efficiently than ever before and Community Police Stations are designed to help neighbourhood officers be closer to the communities they serve, while also reducing our annual running costs.

“The Chief Constable and I remain committed to providing a visible and accessible police force, as best we can with the resources we have available. While the service we can offer has changed, I think Rainford Village Hall is an excellent location for a Community Police Station. It will put the neighbourhood team right at the heart of the community in a busy location which is clearly really popular with local people, is already used for a host of activities and events and which has been recommended by local councillors. I hope it will be a real asset to the community.”

Conor McGinn MP said: “It is vitally important that our towns and villages have a visible and responsive policing presence and the reopening of Rainford Station, even on a limited basis, is recognition of the need for police officers to be in our communities and working with our communities.

“I am grateful to the Police Commissioner for her strong leadership and engagement with me and St Helens Council in ensuring that we meet the policing needs of local people in tackling crime and keeping them safe.

“The consequences of central government-imposed cuts to Mersey Police have been felt acutely in St Helens over the last number of years. The Commissioner, the Council and I will continue to work together to mitigate the effects of continuing cuts across Merseyside, and to ensure visible, responsive and well-resourced policing across St Helens North from Billinge to Newton and Parr to Rainford.”

"I will continue working with Jane to ensure the Borough's other larger stations become 21st Century provisions with the right level of resources to serve the communities where they are located. We will continue to explore other possibilities for improvements in our other communities."

The Community Police Station in Rainford will be open on a regular, but not continuous basis and will include public meeting rooms and facilities from which officers can parade on. It will not house any custody suites or cells. Surgeries will be publicised at the centre, on local billboards and through the Force’s website.

Merseyside Police’s Community Policing Chief Inspector Gary O'Rourke said: "Community Police Stations are designed to be accessible, visible centres which give local people access to their neighbourhood police team in a busy, centrally-located base. They put our teams right at the heart of the communities they serve.

“Our local policing officers will be on hand to listen, and to provide advice and reassurance. By holding regular surgeries, members of the public have the opportunity to pop in and discuss their concerns and share their views with their local team in a convenient location.”

Existing community police stations in Eccleston, Billinge and Sutton are also due to be refurbished before April 2019.