Remember the fallen from home this Remembrance Sunday 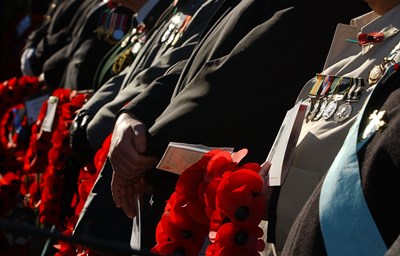 People are being urged to go online this Remembrance Sunday to pay their respects to those brave men and women who have fought for their country.

Due to the ongoing health pandemic, this year’s Annual Service of Remembrance will take place online on Sunday 8 November, starting at 10.30am.

There will be no public gathering on this day.

The online service, which was pre-recorded in October with all covid-safe measures in place, is entitled Remember from Home and is officiated by The Rector of Liverpool, The Reverend Canon Dr Crispin Pailing.

In attendance are civic dignitaries including the Mayor of Liverpool Joe Anderson and the Lord Mayor of Liverpool, Councillor Anna Rothery. They are joined by a small number of key representatives from the military, ex-service organisations and faith leaders.

It will include a virtual parade made up of footage supplied by regiments and associations across Liverpool and will be accompanied by music from The Band of The Duke of Lancaster's Regiment.

The Service will also reflect the city’s diverse communities and their contribution to Britain’s war effort, with a particular emphasis on black service personnel who served during World War One and their subsequent treatment when they returned to the UK and Liverpool.

A specially commissioned spoken word piece by Liverpool poet, rapper, singer-songwriter and producer Daniel Sebuyange, known professionally as Blue Saint, will also be performed and released in the run up to the service to express the deep significance of Remembrance Sunday, especially during the current health pandemic.

Watch the online service at www.liverpoolexpress.co.uk/sor/.

At 11am on Sunday, residents are asked to observe the two-minute silence at home or on their doorstep, in line with the wishes of the Royal British Legion.

Anyone who would like to lay a wreath at the Cenotaph on St George’s Hall plateau is asked to do so ahead of lockdown regulations coming in to force on Thursday 5 November.

Members of the public are encouraged to visit Culture Liverpool’s digital memory wall to contribute their memories, photos and stories of those who have died during times of conflict, served in the military or support services.

Anyone who wishes to comment in the ‘Thank You’ book held within the Liverpool Hall of Remembrance, can email their message to [email protected] and can also search for relative’s name who served during World War One on the Roll of Honour here.

An education pack is also available on the Culture Liverpool site which features links to a whole host of remembrance resources.

Lord Mayor of Liverpool, Councillor Anna Rothery, said: “Remembrance Sunday is a time when the country comes together to remember those who have paid the ultimate sacrifice in two world wars. It is also a time to remember those injured and bereaved in recent conflict.

“Our annual service attracts huge crowds to St George’s Hall plateau and this simply isn’t something we could do this year. I am honoured that we can still offer a virtual service which gives people the chance to take some time out on Sunday and pay tribute to those who have made the ultimate sacrifice. “I would like to take this opportunity to praise and thank our present military who have played such a vital role during the pandemic, many who are reservists, key workers or working for our National Health Service."

On supporting the virtual service, the County President, The Royal British Legion, Lieutenant Colonel Anthony Hollingsworth MBE said: ‘The Royal British Legion has a long association with the Liverpool and this year we are proud to again stand shoulder to shoulder with the city and support the plans during such difficult times.  “It was a privilege for me to be part of the virtual service and provide the act of remembrance which is so hugely important. “I ask our ex-servicemen and women to adhere to the guidelines set out by The Royal British Legion and Liverpool City Council. Please remain safe and take time to remember those who have paid the ultimate sacrifice for our freedom.”

“Faith, as well as hope, is an extremely powerful and much needed force that drives us, motivating us to keep moving forwards, to endure, to remain resilient."