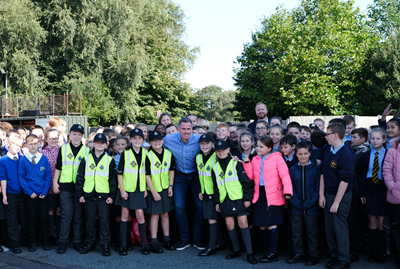 Schoolchildren from Sefton have today, Tuesday, 4 February, attended a prize-giving event for their involvement in an anti-scrambler bike education project.

The project, which is now in its fifth year, was set up by Constable Alan Thompson from Sefton Neighbourhood team, with help from Sefton Council and Alder Hey Children’s Hospital, and each year aims to educate children and highlight the impact off-road bikes have on local communities in Sefton.

The five schools involved are:

Early in 2019, Year 5 pupils at the schools received education on the dangers of off-road bikes and the impact they can have on local communities. Assemblies were delivered to each of the primary schools from Merseyside Police, Sefton Council Anti-Social Behaviour Unit and Alder Hey Hospital and once the pupils returned to school to begin their Year 6 studies, they each designed a poster as part of a competition. They also took part in activities including an activity day at Crosby Lakeside Adventure Centre and the re-enactment of a crash involving a scrambler bike at Croxteth Community Fire Station.

The 15 winners of the poster competition were presented their certificates by Rachel Brown-Finnis, BT Sports analyst and former Liverpool, Everton and England goalkeeper before the grand unveiling of the top-secret children’s prize, a trip of lifetime to Disneyland Paris. Their posters will also be used in a publicity campaign in the Sefton area.

"Nuisance bikes are a blight on the whole community. That is why it is so important we engage with young people from an early age to make them aware of the potential dangers and help steer them away from getting involved with the anti-social and illegal use of bikes. It is clear from the posters which have been produced that, once again, the pupils involved have shown real enthusiasm and energy for this project. Their work will be used to send out a strong message about the harm these bikes can cause.

"I congratulate the winners and all the young people who have taken part, as well as the officers and staff who have worked so hard on this very successful project."

Assistant Chief Constable Jon Roy said: “Now in its fifth year, the anti-scrambler bike project has continually proved to be a fantastic way of educating children on the dangers these bikes can present, and it was a pleasure to see the winners rewarded for their hard work at tonight’s presentation.

“We know the impact scrambler bikes can have and the nuisance they can cause within our communities, and we are constantly working with our partner agencies and local schools to eradicate the problem. However, we can’t do this alone and the support of parents and guardians is vital when it comes to educating young people.

"During the project, the children have all put a lot of effort into their posters and have had plenty of fun, but we hope they have learnt important lessons that will stick with them as they grow up, and that the information they take away deters them from using scrambler bikes in the future and encourages them to highlight the dangers to others.”

Cllr Trish Hardy, Sefton Council’s Cabinet Member for Communities & Housing, said: "We never fail to be amazed at our fabulous Sefton school pupils who work so hard on this project.

"Scrambler bikes are a blight on our communities and yet again through this initiative we want to make sure important messages about the risks and dangers of using them are learnt.

"It is also another great example of partnership working and engaging with our communities to make Sefton a safer place for everyone."