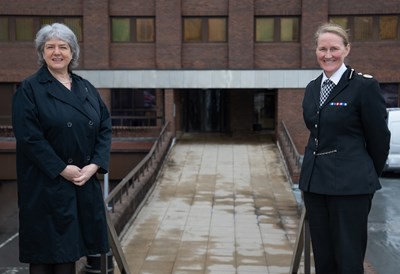 Serena Kennedy will be Merseyside Police’s first female Chief Constable after her selection by the Police Commissioner was confirmed by the region’s Police and Crime Panel today.

Jane Kennedy announced on International Women’s Day that Merseyside Police’s Deputy Chief Constable Serena Kennedy was her preferred choice to take over the top role at the Force when the current Chief Constable, Andy Cooke QPM, leaves in April.

The Commissioner’s decision was referred to the Police and Crime Panel, who considered the appointment at a virtual confirmation hearing today (Thursday 18th March). The hearing, which was live-streamed to enable members of the public to observe, gave Panel members the opportunity to review the recruitment and selection process, assess the supporting documents and interview DCC Kennedy.

The Panel, which is made up of elected and independent members from across Merseyside, had the power to either ratify or veto the Commissioner’s proposed candidate. Members were satisfied that DCC Kennedy was the right person to take over the job when Andy Cooke leaves the Force to join Her Majesty’s Inspectorate of Constabulary and Fire and Rescue Services.

Commenting on the Panel’s endorsement, Jane said: “I am very pleased that the Panel has approved my selection of Serena Kennedy to be the next Chief Constable of Merseyside Police.

“Serena joined Merseyside Police in 2017 and throughout her time as both Assistant and Deputy Chief Constable, she has demonstrated clear strategic leadership, the highest standards of professionalism and her commitment to Merseyside Police. These are qualities which were clearly evident during the interview process and impressed both myself and the entire interview panel, which was made up of highly respected leaders across the fields of policing, politics, local government and health.

“Serena has exceptional experience of policing, is very well respected in the policing community and already holds a number of significant national roles. She has shown the vision, ethics and leadership qualities needed to ensure that Merseyside Police remains the best performing urban force in the country, ensuring it will continue to deliver the high quality of policing that people here on Merseyside expect and deserve.

“I have no doubt that Serena is the best person for the job and that she will be a fantastic ambassador for the both the Force and the region. It gave me great pleasure to announce that I had elected her to become the Force’s first female Chief Constable. To do that on International Women’s Day was the icing on the cake! I am grateful to the Panel for its endorsement of my selected candidate today.

“I look forward to working with Serena to deliver my police and crime priorities for the region for the short time we will both be in post before I step down in May. Her appointment ensures there will be a smooth transition when Andy Cooke leaves Merseyside Police, giving the Force the stability and directions it needs and ensuring it is in the best possible position to go forward with a new Police and Crime Commissioner.”

“I will be incredibly proud to lead Merseyside Police and I’m looking forward to enhancing our Community First approach to policing, which has the public firmly at the heart of everything we do.

“The last 12 months have been particularly challenging for everyone, including the police service, and I am committed to working with communities, partners and my staff to maintain our first class service.”

The appointment has also been welcomed by the Chief Constable, Andy Cooke QPM, who said: “I am delighted that the Police & Crime Panel have confirmed Serena as Chief Constable of Merseyside Police.  Serena has been a loyal and extremely professional Deputy to me and I have no doubt she will continue to ensure that Merseyside Police is regarded as one of the best Police Forces in the country.

“I wish her every success for the future.”

Serena was selected as the Police Commissioner’s preferred candidate following a thorough and rigorous assessment and interview process led by the Commissioner and supported by an experienced panel, made up of senior representatives from policing, politics, local government and health.

During the assessment, the candidates were interviewed and required to give a presentation to the panel which comprised the Police Commissioner, the UK’s Independent Anti-Slavery Commissioner and former Chair of the National Police Chiefs Council (NPCC) Dame Sara Thornton, the former Chief Executive of the College of Policing and HM Inspector of Constabulary Mike Cunningham, the Liverpool City Region Metro Mayor Steve Rotheram, St Helens Council’s Chief Executive Kath O’Dwyer and the Director of the Liverpool School of Tropical Medicine Professor David Lalloo.

Cllr Paul Lynch, the Chair of Merseyside’s Police and Crime Panel said: “Serena Kennedy is a formidable candidate who gave a pitch perfect interview before the Panel. I am glad to say that the Panel agreed with the Commissioner's recommendation, and I wish the new Chief Constable luck for her term in office.”

A full report outlining the Panel's decision will be published on the Police and Crime Panel's website.