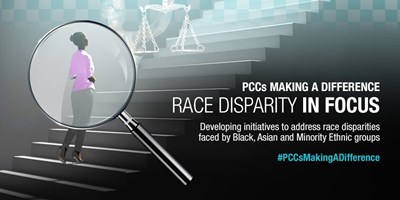 Two ‘first-class’ charities commissioned by Merseyside’s Police Commissioner to support Black, Asian and Minority Ethnic (BAME) victims of crime have been featured in a new national publication showcasing some of the best initiatives addressing racial disparity across England and Wales.

The services delivered by the Anthony Walker Foundation and Savera UK as part of Jane Kennedy’s Victim Care Merseyside service are showcased in ‘Race Disparity In Focus’ which has been launched by the Association of Police and Crime Commissioners (APCC).

The 47-page digital publication, which includes a foreword from the Minister for Crime, Policing and the Fire Service, the Rt. Hon Kit Malthouse MP, provides a snapshot of the initiatives developed by Police and Crime Commissioners (PCCs) to address the issue of racial disparity, to improve representation and diversity, drive out hate crime and provide support for victims of crime.

Among the 20 case studies in the new publication is a feature on these two of Jane’s Victim Care Merseyside services and the specialist work they are undertaking to provide focused support to BAME victims of crime who may previously have been invisible to the authorities.

Over the last five years, the Anthony Walker Foundation has helped nearly 5,000 people subjected to abuse or hatred because of their race or religion. The Foundation has also engaged with many thousands of community members and young people to improve understanding of the issue of hate crime with the aim of building safer, stronger communities.

The feature article also describes the intensive work carried out by Savera UK who support victims of harmful practices, including those subjected to, or at risk of, forced marriage, female genital mutilation and ‘honour’-based abuse.

Jane said: “People who are of a BAME background are more likely to be victims of crime and to suffer disproportionately in comparison to those of a white British background.

“Research conducted by my own team to inform me which were the most pressing areas of need revealed that many of these crimes continue to be unreported to the police, meaning vulnerable victims were suffering in silence.

“I was committed to changing that. By working with the Anthony Walker Foundation and Savera UK, I have been able to provide two services which are specifically designed to meet the needs of those previously invisible victims.

“I’m delighted that, through this new national publication, I have had the opportunity to shine a spotlight on the fantastic work delivered by these two first-class local charities. They are both outstanding and I am proud to work alongside them through the Victim Care Merseyside service, to raise awareness of these often hidden crimes and offer support to those who have been subjected to some devastating experiences.

“The testimony from the survivors who have turned to the Anthony Walker Foundation and Savera UK in their hour of need brings home just how truly invaluable these services are – not only improving lives, but in some cases, saving lives.”

Victim Care Merseyside is a specialist package of support developed by the Commissioner which is designed to give victims the best possible help to cope and recover from the after effects of crime. If you’ve been affected by crime, please visit the Victim Care Merseyside website which offers advice, guidance and a directory of services which offer support at www.VictimCareMerseyside.org

‘Race Disparity In Focus’ is the latest in a series of documents produced by the APCC to publicise the work of PCCs. Read the full publication here.