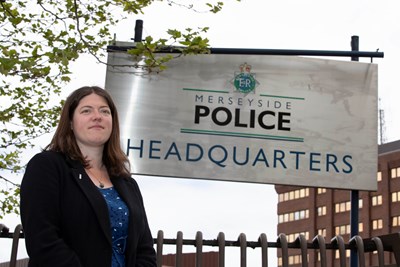 The Police Commissioner took the decision to focus this meeting on her priority of ‘Supporting Victims; Safer Communities’ to give the public a chance to ask their questions on this important issue and continue the conversation about Violence against Women and Girls (VAWG).

It will cover the force’s performance on crucial issues, including rape and sexual assault, domestic abuse, exposure and voyeurism and stalking. Issues including modern slavery, hate crime and stop search will also be reviewed.

The meeting will provide Chief Officers with the opportunity to give the Commissioner a detailed account of the force’s progress in how they address these issues, work to bring perpetrators to justice and provide support for victims and survivors, enabling Emily to identify if there are any areas of risk.

The two-hour meeting, which will be held at the Liverpool City Region Combined Authority chamber in Mann Island, will be recorded so members of the public can review it at any time.

Emily said: “The way police forces in this country support victims, build safer communities and, crucially, address Violence against Women and Girls is rightly in the public spotlight at the moment.

“Policing nationally has been rocked by the tragic murder of Sarah Everard’s tragic murder and evidence shows women’s trust in the police across the country has been affected. It is vital police leaders now focus on rebuilding that faith and that includes showing what they are doing to tackle this issue, to improve their support for victims and bring perpetrators to justice.

“That’s why I took the decision to focus my next public Scrutiny Meeting with the Chief Constable on Merseyside Police’s work to address these issues.

“This meeting will give the Chief Constable and her team an opportunity to detail how the police respond to reports of rape, sexual violence and domestic abuse, the steps they are taking to reassure women in our communities and how they are working with partners to protect the vulnerable and create safer communities.

“It will also give me the opportunity to challenge the Chief Constable about areas where improvements can still be made.

“It’s vitally important the public trust the police and can see that money and resources are being used wisely to deliver the best possible service to keep our communities safe and my Scrutiny Meetings are a great way local people can have their voices heard and gain an insight into how Merseyside Police operates.

“I would encourage everyone to watch live today or visit my website afterwards to see a recording of this meeting.”