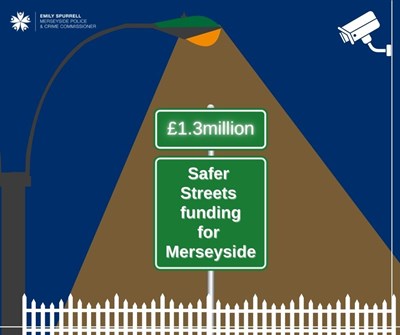 A £1.3m windfall has been secured by Merseyside’s Police Commissioner to improve safety and tackle anti-social behaviour in two communities blighted by crime and to expand a powerful campaign to tackle Violence against Women and Girls across the region.

Emily Spurrell has successfully bid for the huge cash investment from the Government’s Safer Streets Fund for two projects focused on reducing crime in hotspot areas in Knowsley and Liverpool, and for extra funding to expand the successful Safer Streets Liverpool campaign aimed at preventing sexual violence particularly around the public transport network.

Working with Knowsley Council, £367,000 of funding will be used to improve the safety of residents in Primrose Court, a housing estate which has suffered from high levels of crime and anti-social behaviour in recent years.

The new funding will be used to put in place a raft of measures aimed at preventing crime and making residents feel more secure in their homes, including the installation of new CCTV, street lighting and fencing. The funding will also be used to provide security devices for homes on the estate, tackle fly-tipping and improve local green spaces with the aim of rejuvenating the area and creating a healthier environment for residents.

A similar community safety project will also be undertaken in Picton in Liverpool, an area which has a large student population and has seen a high number of burglaries in recent years.

With this major new investment of £390,000, Liverpool City Council will work with the PCC and Merseyside Police to improve and upgrade street lighting, repair alley gates, redeploy CCTV and introduce security equipment to improve the safety of residents.

The project team will also work with the universities on a communication campaign focused on increasing crime prevention awareness and helping to integrate the student population with residents’ associations and community groups.

A further £576,000 has been secured to expand the Safer Streets Liverpool campaign to tackle Violence against Women and Girls (VAWG) and improve women’s feelings of safety, particularly around the public transport network.

The campaign, which was launched in partnership with Liverpool City Council in March, will be expanded to see an increased uniformed presence around transport hubs in Liverpool city centre and dedicated student nights on the main bus route used by young people, as well as the introduction of 21 CCTV cameras along the route.

Student volunteers similar to ‘street pastors’ will provide support to those who need it, such as helping people get home or providing emotional support.

The new funding will also be used to roll out the campaign’s educational programmes and marketing campaign to all areas of the region.

Today’s announcement brings the total funding secured by the PCC’s office from the Safer Streets Fund to almost £3m.

Merseyside’s Police Commissioner Emily Spurrell said: “I am overjoyed we have secured this huge cash investment totalling £1,336,490 for these three much-needed projects aimed at improving safety in key areas across our region.

“I visited both Picton and Primrose Court last week as part of ASB Awareness Week and saw for myself the issues these communities are facing.

“Knowsley is one of the most deprived Boroughs in the country, yet it didn’t receive a penny in the Government’s so-called ‘levelling up’ announcement. I’m determined to do what I can to address that, so it’s great news that we have secured this major cash investment to focus on putting a stop to the issues which have afflicted Primrose Court for so long and to create a safer, cleaner, healthier environment for people living there.

“Picton is another area of our region which has unfortunately been plagued by issues in recent years, particularly burglaries.

“Using this major cash boost, we can look to put some long-term measures in place relatively quickly and easily that will make a genuine difference, helping to cut crime and improve the safety of local people.

“No-one should feel unsafe in their home or the area where they live. We’ve seen the success previous Safer Streets projects have had in other parts of Merseyside, like Birkenhead and the Flower Streets of Kirkdale, so I’m really hopeful we can change things for the better in Huyton and Picton too.

“I’m also thrilled that we’ve secured such a huge investment to expand our very successful Safer Streets Liverpool campaign across the whole of Merseyside.

“Women and girls told us they feel most unsafe using public transport at night, and this two-pronged campaign is really focused on responding to their concerns. Using practical solutions such as CCTV, a text message reporting service and bystander training, as well as education programmes and a high-profile marketing campaign, we want to prevent and tackle sexual violence and ensure every woman feels safer and is safer.”

Cllr Shelley Powell, Knowsley Council’s Cabinet Member for Communities and Neighbourhoods said: “We know crime and anti-social behaviour in Primrose Court is an ongoing issue and one we and our partners have been continuing to address for some time. I’m delighted that we have secured this funding to tackle the area’s problems and the funding will be used to help to address a number of priority issues including highways, street lighting and CCTV.

Mayor of Liverpool Joanne Anderson said: “Improving safety in our neighbourhoods and tackling violence against women and girls are both huge priorities and I am delighted we have secured this funding.

“We have already had success tackling offences due to the Safer Streets Liverpool campaign, and the additional work we are planning will provide a reassuring presence to students on the way home.

“It is vital that we don’t just challenge behaviour but also seek to change it, which is why the education element is so important.”

Merseyside Police’s Deputy Chief Constable Ian Critchley said: “This funding will help us continue our work with our partners to make our streets safer for women and girls, as well as tackle anti-social behaviour and burglary in two areas that have sadly suffered at the hands of criminality in recent months.

“The expansion of the Safer Streets Liverpool campaign will build on efforts to ensure women feel safe as they move around the city, with more officers and CCTV coverage in key areas. Crucially, the next generation, as well as adults, will benefit from a programme to influence and challenge damaging behaviour.

“We have increased patrols and engaged targeted operations following reports of anti-social behaviour in Primrose Court in Huyton, and this funding will mean lasting physical changes can also be made to the area. It will be used to improve the appearance of the area, and street lighting and CCTV will be installed.

“It is hoped this will restore pride in the area, help us detect criminality and bring offenders to justice, and ultimately deter anti-social behaviour.

“In Picton earlier this year, we investigated a number of reports of burglars entering unlocked doors and taking electrical equipment, with students among those targeted.

“We increased patrols in the streets affected and officers staffed a mobile police station in the area, providing residents with home security advice and handing out smart video doorbells, marking property and registering electrical items. This funding means this work can continue with new residents, and that alley gates can be repaired alongside efforts to help students feel more involved in the local community.”