Merseyside's Independent Custody Visiting Scheme is designed to make sure people who are detained by the police are held in accordance with the law.

In 1981, Lord Scarman commissioned an enquiry into the Brixton and Toxteth riots, and it was recommended that to improve public confidence in policing, more transparency was needed. Independent Custody Visiting was recommended on a voluntary basis on the part of Police Authorities, which later became a statutory requirement under the Police Reform Act 2002.

Merseyside’s Independent Custody Visiting was established in 1984 which comprised of 20 members from the Policing Authority. Later that year, members of the public were invited to apply. Then in 2012, responsibility was transferred to the Police Commissioner (PCC).

Independent Custody Visitors (ICVs) are members of the local community who make unannounced visits and observe, comment and report to the PCC on the conditions under which people are detained in force custody suites. The PCC is then informed and can conduct action if necessary. Consequently, ICVs play a valuable role in maintaining public confidence in this important area of policing. ICVs determine whether the regulations governing detention have been complied with, and the interests of detainees properly considered.

Merseyside currently has 26 dedicated volunteers from across the region involved in this scheme. These committed volunteers visit custody suites within Merseyside at random and complete a report which covers all aspects of ensuring the detainee’s welfare is being cared for appropriately.  Reports which draw together issues and identify trends emerging from the visits are then presented to the Commissioner in order to consider action. Our ICVs are made up from a diverse range of volunteers. To view the demographics of our ICV force, please click here.

Volunteers are unpaid but are reimbursed for travelling expenses.

Statement from the ICV Chair: 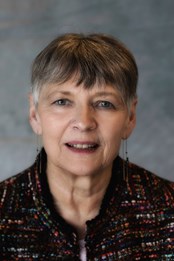 “Last September, I was delighted to become chair of the Merseyside Independent Custody Visiting scheme.

"It was daunting to be taking over from Reverend Peter Beaman who had been a custody visitor since the scheme started over thirty years ago, but I was pleased to be welcomed by the senior police officers responsible for the Criminal Justice department including the Chief Constable. Anecdote suggests it may not have been quite the same when the scheme started.

"Today the police see custody visitors as crucial to both public and internal assurance about how detainees are treated in custody.

"Considerable thanks go to those volunteers who become custody visitors, they are generous with their time and their compassion for people in difficult circumstances. It isn’t always easy to go into custody suites, those being detained maybe struggling with a variety of problems, but our visitors make that effort on a regular basis.

"I would encourage anyone who has an interest in justice to consider volunteering. Visitors go in pairs and unannounced. Everyone is able to be flexible, arranging their visit with their partner. Potential visitors are vetted and trained before they start.

"The reward is a contribution to public assurance and to help to ensure that people in a vulnerable situation are treated with decency and dignity, it is also working as part of a likeminded team. The scheme is run by the Office of the Police and Crime Commissioner and both the Commissioner, and her staff are very supportive and appreciative of the value brought by the visitors’ independent eyes.” 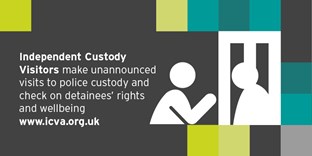 We are looking for new volunteers to join the Independent Custody Visiting Scheme. If you would like more information or are interested in applying, please use the link below:

You can also find out more about custody visiting nationally on the Independent Custody Visiting Association website.