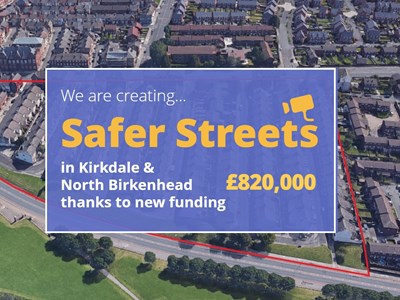 Nearly £820,000 of funding has been secured by Merseyside’s Police Commissioner to crackdown on burglaries and robberies and make the streets of Liverpool and Wirral safer.

Emily Spurrell has been awarded the money from the Government’s Safer Streets Fund after working with Merseyside Police and Liverpool City Council and Wirral Borough Council on joint bids for key projects aimed at cutting crime and improving safety in two of the region’s most deprived areas.

A total of £385,000 has been awarded from the fund to focus on improving safety in the ‘Flower Streets’ of Kirkdale, an area which has suffered high levels of crime and been blighted by drug dealing and gang crime in recent years. Measures such as upgrading and increasing CCTV in the area, repairing and improving alley gates and introducing 70 new street lights will prevent crime, making it safer for residents.

The funding will also be used to carry out regular partnership days to support residents by providing crime prevention advice and tackle issues such as fly-tipping and graffiti.

A further £432,000 has been received for a second project tackling neighbourhood crime in North Birkenhead, in an area next to the first Safer Streets project which has run over the last six months.

The funding will be used to install 30 new alley gates, improve the existing CCTV system and install 10 new cameras, as well as upgrade the street lighting with the aim of better protecting resident.

A series of 12 ‘days of action’ will also be held in the project area, which covers Park Road North, Cleveland Street, Conway Street and Hoylake Road, to work with local people to clean up the streets and increase community pride.

Merseyside’s Police Commissioner Emily Spurrell said: “No one should feel unsafe in their home or the area where they live.

“When this second round of the Safer Streets Fund was announced, my team worked with our partners to review areas across Merseyside to see where we could use this funding to make the biggest difference to local people.

“It was clear that the ‘Flower Streets’ of Kirkdale and the ‘North End’ of Birkenhead were two areas which had been particularly blighted by crime and anti-social behaviour in recent years, but where some simple, straightforward solutions could be put in place to prevent crime and significantly improve the safety of the people living there.

“With this funding, we will be able to put some long-term measures in place relatively quickly and easily that will make a genuine difference, helping to rejuvenate these areas and build safer, stronger, healthier communities. My thanks go to everyone who worked on these bids and I look forward to seeing the difference this major investment will make for people living in these areas.”

Liverpool Community Policing Superintendent Diane Pownall said: “It is great news to hear that this money has been allocated to Liverpool.

“The money will be spent making significant improvements to the ‘Flower streets’ in Kirkdale. The people who live in that area have long felt the effects of an area in decline and in particular the impact of drug dealing and antisocial behaviour on their day to day lives which we continue to tackle.

“The funding will be able to pay for partnership days and tackling the root cause of ASB such as graffiti, littering and improving street lighting. There will also be investment in improved CCTV.

“I hope that it will make a real difference to the local community and encourage people to feel proud of their local area.”

Wirral community policing Chief Inspector Roger Pegram said: “I am delighted with the announcement of £432,000 in funding for the Birkenhead area. We have worked closely with our colleagues at Wirral council and the Office of the Police and Crime Commissioner to identify how best this money would be spent for the people living in Birkenhead.

“We will continue to do everything we can to police the local community and this funding will go a long way to helping us to achieve this.

“It is important for me that we protect all our residents and the installation of alley gates, improved street lighting and repairs and upgrades to existing CCTV will hopefully mean that we can eradicate some of the issues that affect people most and ensure they feel safe on the streets.”

Cllr. Helen Cameron, Chair of the Tourism, Communities, Culture and Leisure Committee, said: “This is really welcome news for Wirral. The last round of funding allowed us to deliver tangible benefits for the people of North Birkenhead with new CCTV cameras and alley gates installed, upgraded streetlights and home security packs provided to residents.

“Crime and anti-social behaviour not only brings an area down, but can make the people who live there feel that no-one cares. Investing in preventative approaches like alley gates and streetlights, while they may seem small, can make a big difference in helping people feel more secure and happy.

“Alongside the recruitment of an extra 243 police officers in Merseyside, I’m pleased we will be able to continue this work to help more communities.  The next round of the Safer Streets Fund will focus on helping women and girls who are disproportionately affected by crimes like harassment in public places.

“Everyone deserves to feel safe in their home and their local community.”

The Safer Streets Fund first opened for bids in January 2020 with the aim of helping to tackle burglary, theft and other offences in crime hotspots, following a 14% increase in acquisitive crime nationally.

In the first round of funding, the previous Police Commissioner, Jane Kennedy, Merseyside Police and Wirral Borough Council successfully secured nearly £550,000 for a project to improve security in the ‘North End’ of Birkenhead. The six-month long project saw the introduction of a range of community safety measures, including 43 new alley gates, 100 additional and upgraded streetlights and 300 home security packs for residents.

The second round of funding was launched in January 2021

Bids were evaluated against a set criteria and Police Commissioners were asked to outline a plan to reduce crime within a local crime hotspot, demonstrating value for money, evidence of community engagement and long-term sustainability. Merseyside ‘s Police Commissioner received the fourth highest award after Nottinghamshire, West Mercia and South Yorkshire from 35 Police and Crime Commissioners who received funding.