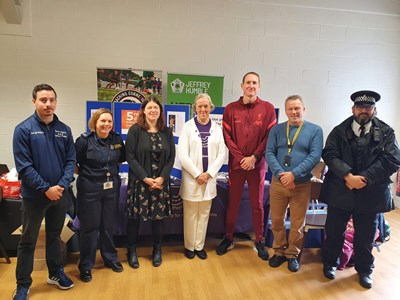 More than 100 footballers from across the North West heard messages about road safety at an under-17s grassroots football tournament on Friday (October 29, 2021).

The RoadPeace Cup was held at the Jeffrey Humble sports ground in Aintree at an event organised with the Liverpool Football Club (LFC) Foundation.

RoadPeace, the national charity for road crash victims, representatives from Merseyside Police, Merseyside Fire and Rescue Service, Merseyside’s Police Commissioner Emily Spurrell and the Merseyside Road Safety Partnership worked together to provide presentations and interactive experiences for those who attended.

Chris, who is now Head Goalkeeping Coach at Colne FC, dedicates a lot of time to charity work and has been open about his own mental health struggles.

He said: “This has been an amazing event. Football is the one language that brings people together.

“We were trying to give the lads as much information as possible so they act responsibly not only when they start driving a car, but when they are passengers, pedestrians or cyclists.

"It’s not just their safety but others too.

“Hopefully they can take it on board and stop as many life-changing tragedies as possible.”

The young footballers listened to RoadPeace trustee and North West local coordinator Pauline Fielding MBE, who has fought for justice since her son Andrew’s death in 1994 at the A540/Raby Park Road junction in Neston.

Footballer Charlie Fogarty MBE, an inspirational speaker who suffered a severe brain injury after being hit by an overtaking car whilst crossing the road in 2012 when he was 15, also spoke to the players.

Shortly before the crash, Charlie had finished a four-year contact with Birmingham City, where he played with Everton star Demarai Gray and was trialling for Milton Keynes Dons.

Following months in a coma, he learned to eat, walk and talk again and has gone on to earn a degree in sports science, five international caps playing for the Northern Ireland cerebral palsy team and set up a disability football team.

He told players about his journey to recovery and urged them to “never give up”.

Merseyside’s Police Commissioner Emily Spurrell said: “RoadPeace’s football tournament was a fantastic way to engage with more than 100 young men, who may otherwise have been quite hard to reach, to promote vital road safety messages.

“Young male drivers are still sadly much more likely to be involved in a road crash than other motorists.

“By combining football with educational presentations, RoadPeace, Merseyside Police and our partners were able to really engage with these young men and reinforce the importance of staying safe as drivers, passengers and pedestrians.

“In particular, I am sure the deeply personal accounts from Pauline Fielding and Charlie Fogarty about their own experiences suffering the devastating consequences of a road traffic crash will have really moved them.”

Heswall FC coach Nick Harland said: “It was an honour to be invited to play in the LFC Foundation RoadPeace Cup.

“Many of our players will soon be young drivers so the event really opened their eyes to the importance of road safety as well as highlighting the brilliant work the charity does.”

Road traffic injury is the leading cause of death for young people between five and 29, according to the World Health Organization. [1] World Day of Remembrance for Road Traffic Victims is on November 21.

RoadPeace Trustee and North West Coordinator Pauline Fielding, said: “Too many lives are lost on our country’s roads – five each day and there are many more life changing injuries. As a bereaved parent I applaud the RoadPeace Cup which uses the power of football to help prevent further death and injury. We will never know how many lives it has saved.”

LFC Foundation Football Programme Manager, Tony Cosgrove, said: “We have been working with RoadPeace for the past three years, using football as a way of engaging with youngsters to promote important safety messages.

“Through the Premier League Kicks project, we combine the educational work we do alongside Merseyside Police and Merseyside Fire and Rescue Service with RoadPeace’s messages around staying safe as drivers, passengers and pedestrians.”