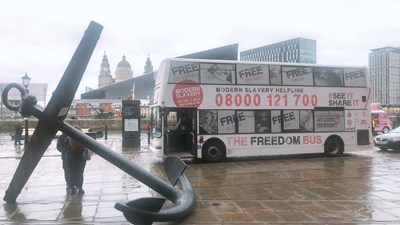 Merseyside’s new Police Commissioner is launching a drive to increase awareness of modern slavery by bringing the ‘freedom bus’ to Liverpool this weekend.

The double decker bus is a mobile exhibition, branded with anti-slavery messages promoting the national Modern Slavery Helpline, which people can call to report any concerns they have about individuals who may be enslaved or trafficked.

The branded bus has been borrowed by the Police Commissioner, Emily Spurrell, from the Pan-Lancashire Anti-Slavery Partnership with the aim of raising awareness in Merseyside by encouraging people to find out more about the issue and learn how to spot the warning signs.

The freedom bus will tour around Liverpool from 10am until 12noon Saturday (29th May), when it will be met by the Police Commissioner, Emily Spurrell, at Liverpool Cathedral. It will then move to the International Slavery Museum on the Albert Dock at 1pm where staff from Stop the Traffik, representatives from Merseyside’s Modern Slavery Network and Merseyside Police, will be on hand to answer questions, give advice and help people to become familiar with the danger signs.

Emily said: “Modern slavery is one of the most abhorrent crimes in society today. Vulnerable people are stripped of their liberty and dignity and forced into servitude and it is happening in communities across the UK, including here in Merseyside.

“This week saw the launch of an independent report which highlighted that more needs to be done to detect and prevent modern slavery and care for the vulnerable people who are trafficked.

“The public are a vital piece of the jigsaw in the fight against this despicable crime. By acting as the police’s eyes and ears, they can help to spot the warning signs that someone is being enslaved and exploited. Thousands of vulnerable people are believed to be trafficked in the UK every year, yet only a very small proportion of cases are brought to the attention of the police and other authorities.

“We can change that by raising awareness of this issue among the public, so they know how to spot the signs and report it when they believe someone may be enslaved. The freedom bus is a great tool for driving awareness and bringing this issue out into the open and I am so pleased it is heading to Liverpool this weekend.”

The Chair of Pan-Lancashire Anti-Slavery Partnership, Sion Hall said: "Modern Slavery is very much a hidden crime. The Freedom Bus is part of a wider strategy of raising awareness around the issues, spotting the signs and what to do if you suspect something.

"Working together we are aiming to help eliminate slavery and support victims. Come and visit us on Saturday May 29th if you can."

Annette Maudsley from Liverpool Stop the Traffik said: “We aim to raise awareness in our city and make it a hostile city for traffickers to work.  Not only do we raise awareness to rescue survivors, and make communities aware of the signs, but we want to protect the people in our city from grooming and trafficking.

“We want men, women, boys and girls to know the signs of healthy relationships, online safety, travelling safely, and how to report.

“We focus on Human Trafficking and Modern Slavery and this bus is an excellent way of reminding people of what is going on, how you can get help and where to report or ask questions.  We are excited to work with so many partners on this project and we hope that people will be helped by having the bus come to our wonderful city.”

“It a despicable crime that can have devastating consequences for victims and abuses their human rights. We will continue to work tirelessly with our partners to ensure that victims are fully supported and to raise awareness of the signs of this appalling crime.

“I would urge anyone who has any information relating to Modern Slavery or human trafficking to contact us on 101, or anonymously through the Modern Slavery Helpline on 0800 0121 700."

To find out more about the warning signs of modern slavery, or to report your concerns, visit the Modern Slavery Helpline on https://www.modernslaveryhelpline.org/ or call 08000 121 700.