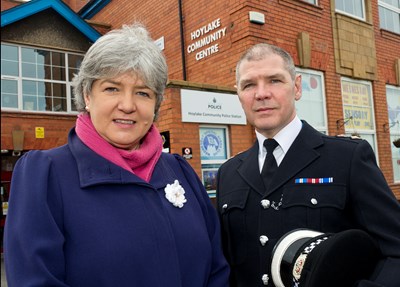 The first Community Police Station to be unveiled under the Police Commissioner’s plans to modernise Merseyside Police’s stations will open its doors in Hoylake today.

The new Community Police Station is the first of its kind to be opened as part of the Commissioner Jane Kennedy’s 10-year strategy to transform and update the Force’s ageing estate.

The opening comes on the same day as the Commissioner joins Merseyside Police’s Chief Constable Sir Jon Murphy and the Mayor of Liverpool Joe Anderson to officially turn the first sod at the site of Merseyside Police’s new Operational Command Centre in Speke.

Community Police Stations are designed to be accessible, visible centres which are co-located with partners in busy neighbourhood hubs which are already well-used by the communities they serve. In Hoylake, Merseyside Police’s local neighbourhood team will run a weekly surgery at the centre where they will be based alongside a coffee shop, community conference and meeting rooms and a sensory play area.

The Community Centre is already used by a wide variety of groups to facilitate a host of activities, including baby and toddler sessions, dance, drama and theatre groups, exercise classes and counselling services. It is also used by long-standing community groups, such as Wirral Older People’s Parliament and offers a range of rooms for hire, including a sensory room for those with additional needs.

Jane said: “I’m delighted that we are finally able to open the doors at the very first Community Police Station to be opened as part of my 10-year Taking the Right Steps plan to modernise Merseyside Police’s buildings.

“This new Community Police Station will put the neighbourhood team right at the heart of Hoylake in a centre which is clearly very well used by all the community. It is clear to me that people in Hoylake are thrilled at the prospect of having their local officers and PCSOs at their community centre on a regular basis.

“The Chief Constable and I want officers to be visible and accessible to local people. It’s what people tell me all the time when I attend events and meet the public. This is the first step in making this a reality.

“By co-locating with partner organisations and community groups in a centre that is regularly open to the public we can make our neighbourhood teams more accessible while also increasing efficiency and partnership working.”

By replacing inefficient and expensive old police stations with new Community Police Stations, the Commissioner will be able to reduce the annual running costs of Merseyside Police’s estate, enabling her to protect even more frontline police jobs.

Community Police Stations have already been successfully piloted in St Helens, helping to reduce anti-social behaviour and improve relationships between the Force’s neighbourhood teams and the public. The intention is to roll this model out across the region, providing modern facilities which are regularly open to local people.

The Community Police Station in Hoylake will be at least two hours every week, with some day time and some evening surgeries. The hours will be publicised at the centre, on local billboards and through the Force’s website.

Merseyside Police’s Area Commander for the Wirral John Martin said: “I am delighted that the Police and Crime Commissioner has chosen Hoylake as the location for the first Community Police Station on Merseyside.

“Members of the public frequently tell us that they want to see our officers at the heart of the community and this is where they will be.

“The fact that the Community Centre is already a very popular resource and well used by local groups and organisations also means that we will have to opportunity to work alongside our partners to offer a comprehensive service.

“I hope that everyone will take advantage of this new facility.”

Take a look at the PCC talking about why the opening of Hoylake Community Police Station is so important: