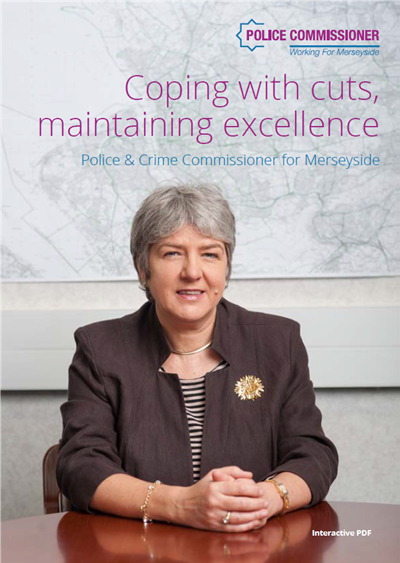 Merseyside’s Police Commissioner has spoken of her pride in the work of Merseyside Police, community safety partners and her team, striving to keep the region safe, as she releases her eighth annual report.

The report entitled ‘Coping with cuts, maintaining excellence’ reflects on Jane Kennedy’s two terms in office and highlights the challenges faced by the Commissioner and the two Chief Constables she has worked with over the last eight year, as well as the achievements which have ensured Merseyside Police continues to be independently assessed as the best performing urban force in the country.

The report also highlights the first signs of ‘light at the end of the tunnel’ for the police service, offered by Operation Uplift and the signs of greater support and resourcing from national government.

The PCC and Chief Constable, Andy Cooke, announced in March their intention to recruit 500 new police officers for Merseyside within a year. Despite the challenges posed by the Coronavirus outbreak, work continues apace to deliver on this pledge and the force is on track to achieve this goal by March 2021.

The report also provides an update on the PCC’s work to deliver on her policing priorities over the last 12 months, highlights the progress which on her 10-year estates strategy to improve the force’s stations and facilities and provides case studies on some of the major projects on which the PCC has focussed in the last few years, including the creation of Merseyside’s Violence Reduction Partnership (VRP), the Merseyside Youth Alliance and her Domestic Abuse Workplace scheme.

The 58-page report also demonstrates the efforts the Commissioner has made to engage with the diverse communities of Merseyside, with nearly 60,000 residents being spoken to or attending events with the PCC and her team during the last five years.

Jane said: “I drafted this Annual Report in March as my second term was drawing to a close. The election for Merseyside’s next Police and Crime Commissioner was just six weeks away and it was my intention to retire, so I took the opportunity to reflect on my full two terms in office.

“It was at this point that the Coronavirus epidemic rocked the entire world and everything was turned on its head. The Government announced local elections were to be postponed until May 2021 and my plans, of course, changed in order that I could continue to provide continuity and stability for Merseyside Police and our communities.

“As a result this year’s Annual Report is no longer my last and my reflections on my entire tenure as PCC were penned a year early but I have taken the opportunity to reflect on the hard work that has taken place every day over the last eight years to keep Merseyside safe and have given an honest appraisal of both the challenges and progress during my time in office.

“I am incredibly proud to have been Merseyside’s first Police Commissioner and I am equally proud of the work achieved by the force, our partners and my team over the last eight years, to cope with cuts while maintaining excellence.

“The introduction of 500 new police officers this year will make a huge difference and will significantly strengthen Merseyside Police. It will be a huge achievement. However, I am conscious that in light of the Covid-19 epidemic, the future is still very uncertain. Public budgets will be strained again and what impact this will have on policing and our plans to return the force its former strength are yet to be seen.

“I most fervently hope that we can continue to restore the strength of Merseyside Police and continue the process of recovery, following a decade of austerity. I will continue to strive to achieve this through my work.

“With the insecurities created by Coronavirus, the challenges looming large in the background caused by Brexit and a continuing rise in complex and emerging crime types, this will be another difficult year for our police service. What I am certain of is the unwavering determination of the officers and staff of Merseyside Police to address the challenges they face, meet the increasing demands placed upon them and come up with new and inventive ways to prevent and reduce crime.

“As always, I thank them for everything they do to continue to keep us safe.”

The Commissioner is required by law to produce an annual report and, as she has done for the last six years, Jane took the decision to provide a draft version to the Police and Crime Panel in July, so members could provide their views. No feedback or suggestions were made by members. This meant the PCC could complete the report and provide the final version at a meeting earlier today, which members formally endorsed.

The report gives both the Panel and the public the chance to review and appraise her progress in delivering her police and crime priorities.

The report, which has been produced as an interactive PDF, includes infographics, diagrams and case studies illustrating the Commissioner’s work including how she engages with the communities of Merseyside, holds the Chief Constable and his team to account, and delivers the Victim Care Merseyside service, which provides support to help vulnerable victims of crime to cope and recover.