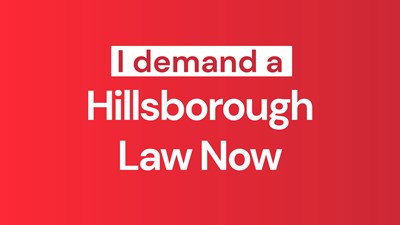 Merseyside's Police Commissioner Emily Spurrell has united with the seven other Labour Police and Crime Commissioners, the West Yorkshire Mayor and the three Deputy Mayors for Policing across England and Wales to join the call for a Hillsborough Law Now.

In a joint statement, the 12 Labour politicians said:

“We join together to support the calls from the Metro Mayors for Greater Manchester and Merseyside, as well as many other high-profile figures from all walks of all life and all parties, for a ‘Hillsborough Law’.

“What happened at Hillsborough in April 1989 was utterly devastating. The cover up that followed was a national disgrace.

“It is only because of the unwavering determination, perseverance and strength of the families and campaigners over a staggering 33 years that the truth was finally uncovered.

“Sadly, there are far too many examples of decent people who have suffered unimaginable heartache having to fight far too long, and far too hard, against the might of the state to get the justice they deserve.

“People who have already suffered deeply, being re-traumatised as they struggle against the very system which should be there to protect them.

“Change is long overdue. Action to improve the system of support for families bereaved as a result of a public disaster is needed now.

“A Hillsborough Law would introduce a package of measures which we believe will help to rebalance the scales of justice. It would ensure bereaved families are treated in a fairer, more just way, and help to prevent them from experiencing the same suffering and torment as those affected by Hillsborough and so many other disasters.

“It would give bereaved families a greater role to have their say at inquests, through publicly-funded legal representation, while bringing to an end limitless legal spending by public bodies seeking to cover up or defend wrong-doing.

“As Police and Crime Commissioners, Mayor and Deputy Mayors for policing, we have a critical role in scrutinising the police. We are already working proactively to increase accountability and transparency within our justice system, and the introduction of a statutory duty of candour on all public servants would be a further welcome step in this process.

“Families who how have been affected by such pain and suffering, deserve the best possible support. We particularly support the recommendation for a Public Advocate to be appointed to act on their behalf.

“Such a move would ensure those families have someone on their side; to help them to get information they need, to navigate the complexities of the legal system, and ensure they are assisted every step of the way to get the justice they deserve.

“We must ensure it is never repeated.

“When disasters occur, we must do everything possible to support the families and ensure those affected get the truth and get justice.

“We join Andy, Steve, and so many others, in urging the Government to commit to bringing forward a #HillsboroughLawNow.

“There is no time to wait.”