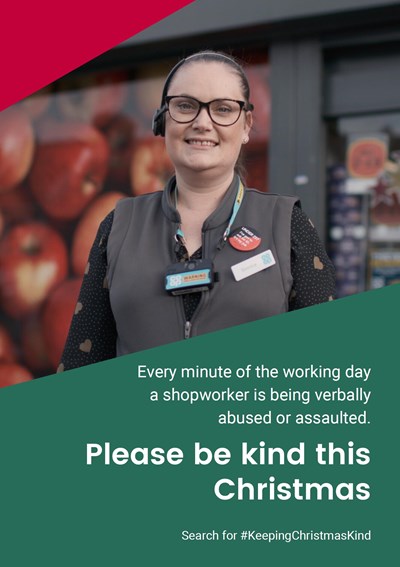 Merseyside’s Police Commissioner is adding her voice to a nation-wide campaign urging shoppers to ‘keep Christmas kind’ this year.

As we approach the busy festive period, Jane Kennedy has joined forces with her PCC colleagues across the country, shop keepers, shop workers and union representatives to make the appeal.

According to retail trade union Usdaw, every minute of the working day during the pandemic somewhere across the country a shop worker was verbally abused, threatened with violence or physically attacked.

A moving film has been released to support the new campaign which includes the testimony of shop workers and their families who have described the abuse they have suffered during the pandemic. The film features real people who have put themselves at risk working in essential shops.

“I worry about Sammie most days when she goes to work, she had a flare pulled out on her recently, it’s so scary.”

“My dad’s had beer thrown at his face and has been physically assaulted, it’s not okay.”

“My mum is just trying to do her job. I’m worried about her safety.”

As Christmas approaches, last-minute shopping sprees will be on the increase and this is causing concern that those on the festive frontline could face some shoppers’ frustrations about wearing masks and social distancing measures.

In preparation for the Christmas surge and, as shop workers across Merseyside prepare to go above and beyond for their customers, the region’s Police Commissioner Jane Kennedy is encouraging people to show kindness to those on the festive frontline.

Jane said: “Shop keepers and shop workers provide an essential service to our communities. That has never been more apparent than this year, when during the pandemic they have helped to keep the country running, providing vital supplies and human interaction for people who may otherwise have been isolated and struggling.

“Nobody should go to work fearing abuse, threats or violence, especially those who go to work to support the people in their neighbourhood. I would urge everyone to make sure that during the season of goodwill, they remember to show patience, warmth and most importantly kindness to those staffing our shops, no matter how busy or stressed they may feel. Please, let’s keep Christmas kind for everyone.”

Mrs Paleja has been the owner of a small newsagents for the last 32 years with her husband who recently was diagnosed with dementia. She is now a full-time carer whilst also managing the running of her busy family business.

In the campaign film, her daughter Mita describes her mother as a superwoman and tells of the abuse she has faced during the pandemic: “My mum is just trying to do her job. She has been threatened with a knife, verbally abused and pushed. She fractured her wrist as a result of that. I’m worried about her safety. Please consider to be kind this Christmas, there is a family behind every business.”

The PCC will be sharing the Keeping Christmas Kind Campaign messages from 1st-8th December on her social media channels, on Twitter and on Facebook.