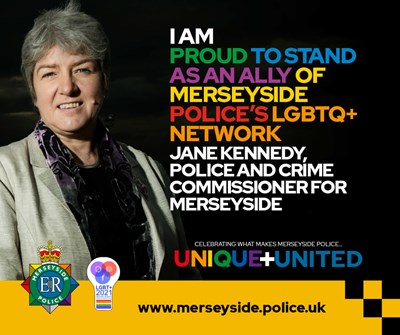 To mark LGBTQ+ history month, Merseyside's Police Commissioner has pledged her commitment to continuing to fight discrimination, stand up against inequality and promote and celebrate diversity, both in the workplace and society as a whole.

This week I watched the movie ‘The Imitation Game’ again.

On occasion during the film, family and friends of mathematician, code-breaker and war hero, Alan Turing reassure him when he is portrayed as having moments of great self-doubt, with the phrase “Sometimes it’s the people no one imagines anything of, who do the things that no one can imagine.” Alan is portrayed as struggling with self-confidence and his sense of self-worth. Although this is disputed by biographers and historians, what is not in dispute is the treatment of him by a legal system which was incredibly inhumane to LGBT+ people.

In spite of his contribution to Britain’s war effort, leading a team of cryptologists at Bletchley Park to break ‘the Enigma code’, after the war he was criminalised for his sexuality and required to accept medication as an alternative to prison. Alan Turing died in 1954, apparently by committing suicide. He was 42 years old.

Alan Turing was posthumously pardoned in 2013 and is now viewed as one of Britain’s most famous victims of homophobia. The film has successfully drawn our attention to the cruelty and intolerance of the past and reminds us that we should always stand against such discrimination and injustice.

Alan Turing’s legacy lives on in many ways today. The machines he helped to develop have become the computers and phones which are now so central to our daily lives. Additionally, through a law informally called the Turing Law, clauses contained in the Policing and Crime Act 2017 pardon men - both alive and dead - who were convicted under old legislation that outlawed homosexual acts.

In LGBT+ history month I am grateful for the opportunity to reflect on the discrimination and prejudice of the past and to make sure that I work towards a brighter, more equal future for everyone. It is a chance to think about intolerance and practice challenging it and to renew my commitment to building a society that is open, inclusive and appreciates the contributions and rich diversity of its LGBT+ members.

A YouGov poll of more than 1,000 teachers working in UK schools carried out in summer 2019 found that LGBT bullying is the most prevalent type of bullying reported in school, with the research showing it was more common than incidents relating to racism, sexism or religion. The research showed that 71% of teachers had witnessed homophobic bullying, with 35% claiming to have observed it at least once a month.

The results of that poll vividly illustrate why we cannot assume the argument for acceptance and for the celebration of diversity has been won. It is why we should continue to stand in solidarity, alongside those who continue to face inequality and hurt. No-one should be subjected to bullying, abuse or hatred because of their sexuality or gender-identity and I’m committed to ensuring that anyone who does suffer such crimes in Merseyside knows how to report it and receives the best possible support. I’m proud to continue working with both Stop Hate UK, from whom I commission an independent 24/7 hate crime reporting service, and with Citizens Advice Liverpool who are commissioned to offer a support service focussed on victims of LGBT+ hate crime.

Alan Turing’s story is now well known, dramatized though it was, and he will not be forgotten. Let’s use LGBT+ history month to celebrate and share Alan’s story, but also the contributions of so many other LGBT+ people. I will use it to renew my commitment to challenge discrimination and prejudice, to make sure everyone has the opportunity to be free to achieve their full potential and ‘do the things that no-one can imagine’.