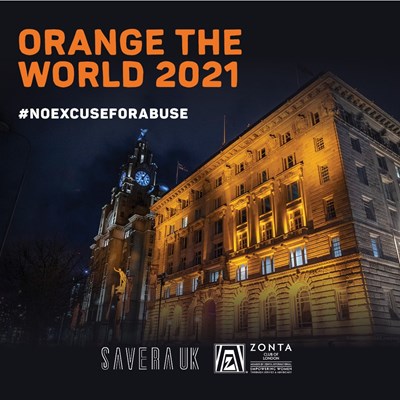 Iconic buildings and landmarks across the Liverpool City Region will be illuminated bright orange from Thursday 25th November, as part of a campaign aimed at ending gender-based violence.

The two organisations are partnering to raise awareness of gender-based violence and abuse in the UK and around the world, through a series of events and initiatives that will take place during the United Nation’s 16 Days of Activism, which run from the International Day for the Elimination of Violence against Women and Girls on 25th November to Human Rights Day on 10th December.

The campaign will begin with the illumination of landmarks in the Liverpool City Region and beyond in memory of all those lost to male violence, but also as a symbol of hope for a brighter future free of fear.

Everton FC will support the campaign by illuminating Goodison Park in solidarity, while Sefton Council will be “lighting up digitally” on 25th November to mark the start of the 16 days of the campaign. Outside of the city region, buildings in Birmingham and Manchester will also illuminate in support of the campaign.

Individuals are also being invited to light an orange candle or light at home after sunset and place it in a window, as a mark of remembrance and symbol of hope.

Savera UK and Zonta London’s campaign also features an activism toolkit that will make it easier for people to participate in and engage with the 16 days of activism. The toolkit addresses themes such as allyship, advocacy and knowledge, and includes a bank of resources including social media assets and fact sheets, information about local and national organisations tackling gender-based violence, and events  that people can attend to learn more.

The campaign will culminate in an online panel discussion on Thursday 9th December (4pm – 6pm), Culture is Beautiful: No Excuse for Abuse, which will tackle the harmful ways that culture is wrongly conflated with human rights abuses against women and girls.

This year’s campaign ‘Orange the World’ campaign is more vital than ever, as violence against women remains devastatingly pervasive in our society. In the 28 weeks following the kidnap and murder of Sarah Everard on 3rd March this year, 81 other women were killed in circumstances where the suspect is a man.

Savera UK CEO and Founder, Afrah Qassim, said: “The statistics about gender-based violence are shocking yet, sadly, no longer surprising. Across their lifetime, 1 in 3 women - around 736 million - will be subjected to physical or sexual violence by an intimate partner or sexual violence from a non-partner. This figure has remained largely unchanged over the last 10 years.

“It has never been more important for people to take action against gender-based violence. Activism takes many forms and even the smallest steps, such as educating yourself about different forms of abuse or identifying yourself as an ally can have an enormous impact. Our Orange the World toolkit provides a starting point for people to enact change.”

Merseyside’s Police Commissioner Emily Spurrell said: “We know there are women and girls – relatives, neighbours, friends and colleagues - who are suffering gender-based abuse and violence in our communities every single day.

“Today, and over the next 16 days, we want to make it clear that there is no excuse for abuse.

"This campaign is about demonstrating our shared commitment to eradicating violence against women and girls.  By lighting up some of Merseyside’s most iconic building in orange, we are sending out a visible message that are determined to create a brighter future for women and girls, free from violence and abuse.

“I would encourage any woman or girl who is experiencing abuse to please reach out for help. There are many fantastic organisations on hand to offer care and support, please visit www.victimcaremerseyside.org for more information.”

Merseyside Police ACC, Ngaire Waine, said: “As a society we all need to take a strong stance against attacks on women and girls, who should be empowered to live their lives without fear of sexual objectification, harassment, or physical and mental abuse.

“Alongside our partners we are committed to making the streets, homes and environments across Merseyside safer for women and girls so they can enjoy their lives to the full without fear.

“Merseyside Police will continue to target perpetrators of this abhorrent abuse and we will support and work with women and girls who are subjected to stalking or harassment, violence, domestic abuse, honour-based abuse or any other crimes based on their gender, so we can identify offenders and put them before the courts.”

Zonta Club London President, Anne-Li Stjernholm, said: “As organisations Savera UK and Zonta Club London are very much aligned on our aim to promote a world without violence against women and girls and this partnership is very valuable for us. We hope it will last for many years to come and that we can expand our reach. Speaking with one voice makes our message so much stronger.”

To find out more about the Orange the World 2021 campaign and download the toolkit, visit: