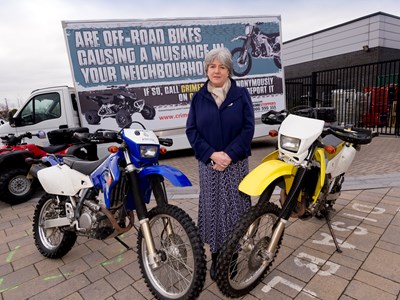 Merseyside’s Police Commissioner is urging people to take 60 seconds to have their say on road safety and help to influence future government policy.

Jane Kennedy is supporting and promoting a national survey being run by the Association of Police and Crime Commissioners (APCC) which aims to better understand public perception of road safety and its enforcement.

The results will be fed into a Department for Transport call for evidence and will help to shape the future of roads policing and what traffic law enforcement may look like in the future.

In 2018, almost 1,800 people lost their lives on Britain’s roads and over 25,000 were seriously injured. The majority of casualties on roads in England and Wales resulted from the ‘fatal four’ – speeding, drink driving, using a mobile phone whilst driving, and not wearing a seat belt.

Working with partners to improve road safety has been a policing priority for Merseyside’s Police Commissioner since 2017 and the region has recorded a 10% year on year reduction in the number of people killed or seriously injured on its roads since then.

Jane said: “Far too many people still lose their lives or suffer life-changing injuries on our roads. These road crashes bring suffering and heartache to those involved, their families and the wider community. I am committed to working with partners and the public to reduce the number of serious accidents on our roads to prevent more families suffering that pain and anguish.

“As part of this work it is important to understand the public’s views around road safety and how our roads should be policed. This survey will give PCCs the evidence they need to lobby central government to ensure more emphasis and greater resourcing is allocated to roads policing and I would encourage people to spend just 60 seconds giving us their views.

“Here on Merseyside, our Road Safety Partnership and the force’s Roads Policing Unit have worked tremendously hard to reduce the number of people who have been killed or suffered life-changing injuries over the last three years, while other police areas have been registering an increase.  But it is important to emphasise that while roads policing teams play a crucial role in enforcing the law to improve the safety of the travelling public, making our roads safer is not solely a job for the police.

“Better engineering of our roads and greater education of road users are equally important if we are to reduce the danger to the public who use the roads.  We need the collective support of all our community safety partners and the public if we are to achieve this and continue to reduce the number of people who are killed or suffer life-changing injuries.”

This poll follows the recent reports, including the Parliamentary Advisory Council on Transport Safety’s report into Roads Policing, and the HMICFRS Roads Policing – Not Optional report.

The survey is open until 5pm on Wednesday 30th September. Take part in the APCC survey here.