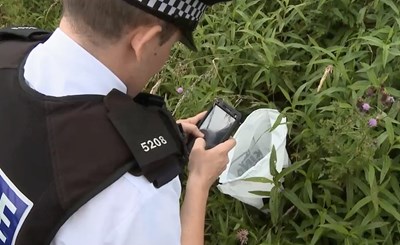 Merseyside Police is today (Monday 23 August) launching a new protocol to safeguard visually impaired members of the community who need to confirm if a person at their door is a police officer.

The protocol can be used by anyone with a visual impairment, to any degree. The service can also be used by carers and anyone who provides support to someone who is visually impaired.

It is important that police officers and staff who call at someone’s address can identify themselves. All police employees (including those in uniform) carry an identification or warrant card, but it can be difficult for someone with a visual impairment to make out details of a uniform or to see a photograph or details on a card.

There are two instances when the protocol can be used. The first is when someone with a visual impairment, rings 101 or 999 to ask for police attendance at their address. In this scenario, a password is chosen during the call and the officer who calls at the address will use this password to verify their identity.

Superintendent Mark Wiggins of Merseyside Police said: “Use of the protocol is optional, but it does add a layer of security and assurance for vulnerable members of our community. The person with the visual impairment is safeguarded by verifying the identity of the police officer, before letting them into the premises. This verification is facilitated by our contact centre, either over the phone or by the attending officer using an agreed password.

“Similar initiatives have been implemented by other forces across the UK and we have adapted the protocol for use in Merseyside. Examples of good practice like this are shared between forces at a national level and we recognised the protocol’s potential to enhance our accessibility and support for vulnerable members of the community.”

Superintendent Wiggins added: “There has been a real team effort to implement the Visual Impairment Protocol in Merseyside, not only between various departments in the force but also with members of our Disability Support Network and our community partners. This consultation included staff and pupils from St Vincent’s School in Liverpool, who helped review the documentation for the protocol and test its compatibility with screen reader software.

“We are really grateful for everyone’s input and experiences in helping us ensure the protocol is accessible to as many people as possible. Degrees of visual impairment vary, and the protocol is not limited to use by those in the community that are registered blind. We were mindful that only a small proportion of those living with sight loss are trained to read braille. We were also concerned that criminals could exploit the ease at which braille strips can be ordered online and customised with any message. This is the reason the protocol is facilitated by the Force Contact Centre and does not use braille.

“The partnership approach taken to develop the Visual Impairment Protocol for use in Merseyside is a good example of preventative policing. It’s about problem solving and reducing the risk to vulnerable members of the community becoming a victim of a bogus caller who purports to be a police officer.”

Merseyside’s Police Commissioner Emily Spurrell said: “It’s vitally important that police officers and staff who go to the door of a victim or witness are able to identify themselves.

“This simple but effective process provides greater security and safeguarding for visually-impaired members of our community, ensuring they can have confidence that the person coming to the door is who they say they are and can be trusted.

“I’d like to thank everyone who has helped to introduce this worthwhile scheme here in Merseyside and I would urge anyone who knows someone with a visual impairment to let them know about this useful protocol.”

Details about the Visual Impairment Protocol are being distributed to members of the community who are visually impaired by community partners including St Vincent’s School, local authorities and Daisy Inclusive UK – the Liverpool-based charity which supports those who are vulnerable, young people with disabilities and their families and delivers the Police Commissioner's disability hate crime support service.

More information can also be found on the Merseyside Police website: https://www.merseyside.police.uk/vip