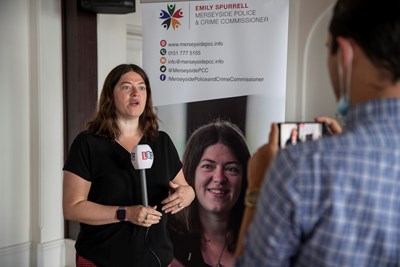 Merseyside’s Police Commissioner Emily Spurrell has spoken of her concern today after the controversial Police, Crime, Sentencing and Court Bill was passed without amendment.

Dozens of amendments were proposed to the contentious Bill by the Labour Party, but it was approved by MPs on Monday evening by 365 votes to 265.

Having concluded all stages in the House of Commons, the Bill will now proceed to the House of Lords to be scrutinised by Peers.

“There are elements of this Bill which cause real concern, in particular the proposed restrictions on “noisy and intimidating” protests which the police are quite clear they do not need.

“This begs the questions as to why the government wish to impose this unnecessary legislation. The right to protest is a fundamental democratic privilege so moves by ministers to restrict this are deeply worrying and place the police under greater pressure.

“This Bill provided the perfect opportunity for this government to show its commitment to the issues which are causing genuine concern in our communities – clamping down on anti-social behaviour, protecting frontline shop workers and tackling and preventing violence against women and girls.

“Sadly, that opportunity has been wasted.

“By pushing through the Bill in its current state, the government have chosen to focus their efforts on divisive measures and clamping down on legitimate forms of protest, instead of focusing on real issues such as the protection of women and increasing the minimum sentences for rapists.”