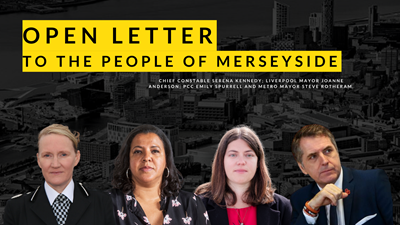 Little did we know when we woke up last week what was going to take place outside the Liverpool Women's Hospital and the collective challenges we would face in our city.

We were all at the Remembrance Service at the Anglican Cathedral when the emergency services were alerted to the car explosion outside the Liverpool Women’s Hospital.

Merseyside Fire and Rescue and Merseyside Police were on the scene within four minutes dealing with the situation, alongside North West Ambulance Service, and thankfully the taxi driver managed to escape from the car without serious injury.

The passenger of the car died after the explosive device he had with him went off.

Officers and staff from Merseyside Police are working round the clock, supporting the investigation which is being led by Counter Terrorism Police North West; policing three scenes (Liverpool Women’s Hospital; Rutland Avenue in Sefton Park and Sutcliffe Street, Kensington) to allow Counter Terrorism Police North West to carry out their investigation; and carrying out high visibility patrols with Merseyside Fire and Rescue Service, community engagement officers from the Office of the Police and Crime Commissioner and representatives of the Local Authority.

Following that first emergency call it has been reassuring to see how different organisations and the public have pulled together in the face of adversity and have refused to let the incident affect their day-to-day lives.

The ultimate goal of terrorism is to create discord, distrust and fear in our communities, and whilst we know some people may be anxious and concerned we have seen people across Liverpool standing shoulder to shoulder.

And that's because Liverpool, which has a proud heritage as a multi-cultural city, and the wider Merseyside region always pull together at times like this and the pride of all our communities is there for all to see.

This is an area defined by its friendliness, kindness and spirit of togetherness and we are immensely grateful for the patience and understanding shown by residents (whilst police investigations continue) but not at all surprised.

We understand the concerns an incident like this can raise, and the co-operation of the residents of Kensington and Sefton Park, is really appreciated.

We would also like to highlight the phenomenal work of management and staff at Liverpool Women’s Hospital for their response to the incident which has been outstanding.

Initially, patients were diverted to other hospitals in Merseyside, but by Sunday evening their business continuity plans were up and running and the staff have carried on providing their crucial service to the people of Merseyside and beyond, looking after women and babies.

Since last Sunday the hospital has delivered more than 150 babies and provided specialist care for more than 60 babies on the neo-natal unit, bringing much joy to many families, and they have been overwhelmed with thousands of messages of support and kindness from the public.

Communities defeat terrorism, which is why we all need to work together. The police depend on information from the public, who at times like this are their eyes and ears, to keep us all safe.

There’s more work still to be done, and already the five local authorities and Merseyside Police are working together to bolster existing plans to support businesses and visitors to the area in the run up to Christmas.

The festive season last year was a washout for everyone because of the pandemic, and we want to make sure that people feel confident to come out and enjoy the city knowing that they will safe.

We will continue to work together and support each other in the coming weeks and months, and in years to come hopefully we can all look back on the spirit shown by so many this week with immense pride.

In the last few days, we have all heard heart-warming stories of people turning up at Liverpool Women’s Hospital with hot drinks for the officers stationed outside.

Residents sending in messages of support and gifts for the staff at the hospital.

Police officers returning from COP26 going straight back on duty to support their colleagues to support the CT led operation and provide reassurance and support to the public.

This is what we do be best.

We pull together in the face of hardship and tragedy. We support each other at times of difficulty. We stand together as one.

It’s why so many of us are so proud to call Liverpool and Merseyside our home.

In the words of Liverpool Women’s Hospital: continue to “Be Kind”, but also 'Be Vigilant” and “Be Safe”