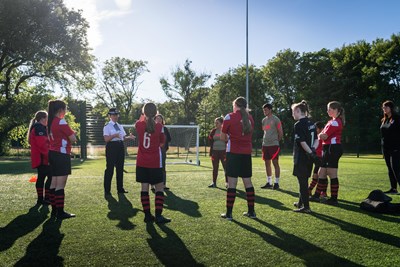 The Awards were held at Wembley Stadium last night, and recognised the best projects and services delivered by County FAs over the past two seasons.

235 submissions were entered from the 50 County FAs, highlighting continuous improvements, and showcasing how they are innovating to improve grassroots football to encourage new players and inspire existing ones.

Launched by the Police and Crime Commissioner, Emily Spurrell, and Chief Constable, Serena Kennedy, in March to mark International Women’s Day, the bespoke football initiative was supported by a squad of partners, including LFC Foundation, Merseyside Violence Reduction Partnership, Everton in the Community, Grassroots Football Clubs and Liverpool FA.

Aimed to increase the opportunities available for girls between 15 and 18 years, the She Inspires initiative offered 12 free weekly coaching sessions delivered by the Liverpool County FA, LFC Foundation and Everton in the Community giving more than 120 girls the opportunity to take part, culminating in an exciting finale in July.

As well as gaining skills on the pitch, all the girls were given the opportunity to complete a fully funded FA Referees Course and Introduction to Coaching Football. 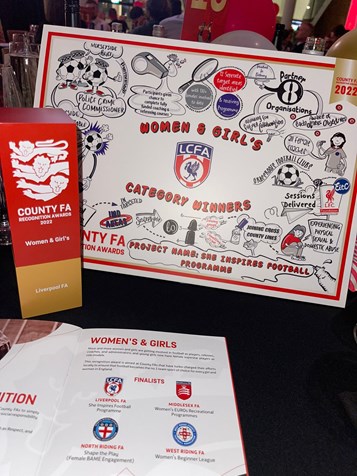 Merseyside’s Police Commissioner, Emily Spurrell, said: “It’s fantastic that our She Inspires tournament has been recognised with this brilliant award by the FA. The Chief Constable and I are united in our determination to provide better opportunities for young people across Merseyside to help them to reach their full potential, and it was a real privilege to see so many talented young women take part in this tournament over the summer.

“For She Inspires to be chosen as the winner from 50 submissions from across England in its first year is a huge achievement and is testament to the enthusiasm and passion of all the partners who worked so hard to pull it together. I’d like to thank everyone who made it such a success. I have no doubt this great programme will go on to even bigger things in the next few years.”

Merseyside Police Chief, Serena Kennedy, said: “Winning this award is a testament to the power of collaborative, partnership working and the passion of everyone involved.

“To be nominated in the first year of the scheme was fantastic – it showed us that we were offering the women and girls of our community a high-quality initiative - but it feels wonderful to be able to offer them an award-winning opportunity. That’s what our Merseyside communities deserve.”

Detective Superintendent Siobhan Gainer, Head of the Merseyside Violence Reduction Partnership, said: “Positive activities go such a long way to increase young people’s confidence, inspire them to believe in themselves, hone skills such as communications and teamwork and give them a life-long love of sport and good health, hopefully bringing about positive influences in their lives.

“From its inception to the final’s day and this award, She Inspires has proved a real winner, and turned those participating into true champions.”

Anna Farrell, Football Development Manager, Liverpool FA said: “For the programme to be nominated and to win a National FA Award in its inaugural year, is a testament to the impact it has made upon its participants.

“It highlights the importance of collaborative partnerships and the changes we can make to our female community when we work together. Over 120 females have been engaged, with 48 to become qualified FA Referees and Coaches and this is just the start as we aim to role the programme out to other ages across the region.”

Matt Parish, Chief Executive, LFC Foundation, said: “We are proud to be a part of the successful She Inspires programme, which provides free and accessible coaching opportunities to young girls across Merseyside.
“To be recognised and awarded by the FA is fantastic and demonstrates the positive tangible results that have been achieved.”

Find out more about She Inspires: