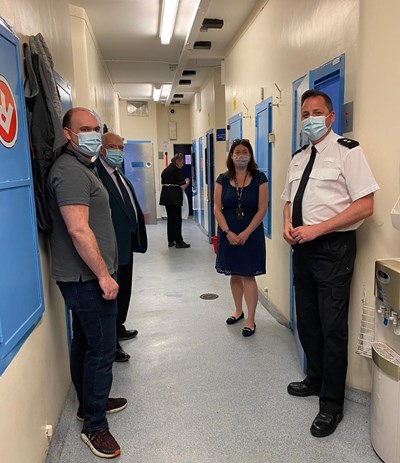 Merseyside's Police Commissioner has marked National Volunteers' Week by recognising the commitment and dedication of Independent Custody Visitors across England and Wales.

Emily Spurrell, who is also the national lead on Custody on behalf of the Association of PCCs (APCC), said:

"This year, to celebrate National Volunteers’ Week, I would like to recognise the commitment and dedication of the excellent work of Independent Custody Volunteers (ICVs) across England and Wales.

"As an elected PCC and as national lead for Custody at the Association of Police and Crime Commissioners, I am fully aware of the vital role ICVs deliver within policing and local communities. ICVs are absolutely central to police scrutiny and maintaining public confidence. These volunteers regularly conduct unannounced visits and meet with detainees to check on their welfare. Essentially, they are your eyes and ears in police custody and the recommendations they make can ultimately protect detainees and those who work within this environment.

"I also want to acknowledge the work of the Independent Custody Visiting Association (ICVA), particularly regarding their commitment to supporting ICV schemes to focus on important issues of equality, diversity and inclusivity. The release of ICVA’s and the Criminal Justice Alliance’s joint report Just Visiting?, published in December sets out welcome recommendations that show a clear determination to tackle and prevent discrimination in custody.

"The vital work of our ICVs often goes on behind the scenes, which makes it more important that their contributions are celebrated publicly. Along with Special Constables, Police Support Volunteers, Independent Animal Welfare Visitors and youth volunteers, the commitment of ICVs remains instrumental to driving excellence in policing."

International Volunteers' Week is held annually on 1st - 7th June. To kick off the week, the Commissioner attended a Valuing Volunteers' awards ceremony at which she presented certificates to eight of Merseyside's ICVs for their commitment and dedication to the scheme.