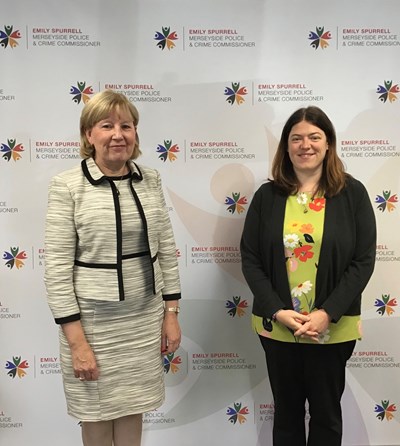 Emily Spurrell has announced that Sue McTaggart MBE, an experienced leader within Merseyside Police and former Chief Executive at North Wales Police and Crime Commissioner’s office, will join her office on a temporary basis following the news that Clive Howarth is leaving her team.

Sue has more than 30 years’ experience working within the policing and criminal justice sector and is currently Programme Director for a collaboration project between Merseyside, Cheshire, North Wales and Dyfed Powys police forces looking to streamline processes and drive efficiencies.

She was previously acting Head of Criminal Justice within Merseyside Police and Chair of the Merseyside Road Safety Partnership and was awarded an MBE in 2011 for her services to policing, specifically victims and witnesses.

Sue, who has a Masters in Police Leadership from Liverpool Hope University, headed up the Office of the Police and Crime Commissioner in North Wales between 2017 and 2018.

Emily said: “I’m grateful to Sue for agreeing to take up the position of Chief Executive on an interim basis. I am looking forward to working with her over the coming months while I undertake the recruitment process to appoint someone permanently to the role.

“Sue is an extremely experienced public servant who has already dedicated more than 30 years to serving the people of Merseyside. She is very knowledgeable about the policing and criminal justice landscape in the region, has a wealth of experience at leading change and collaborating with partners, and understands the challenges facing our police service going forward.

“She has dedicated her career to driving improvements within the sector and has been honoured with an MBE for her work supporting victims and witnesses.

“With her previous experience, I have no doubt Sue will make the transition seamlessly and do a fantastic job leading my office over the months ahead.

“I would like to offer my sincere thanks to Clive Howarth for his outstanding contribution managing the Office of the Police and Crime Commissioner and supporting me and my predecessor during the last five years. He has calmly steered the team through a period of significant change and during the unprecedented challenges of Covid-19.

“I wish Clive every success in the future.”

Following the news that Clive would be leaving her team, the Commissioner took soundings from key partners regarding potential candidates for the interim role. After receiving interest from three senior leaders, interviews were held by the Commissioner and observed by the Chair of the Police and Crime Panel, Cllr John Sayers, and a HR expert.

Sue will take up the position on Monday 4th October.

Sue said: “I’m delighted to be joining the Commissioner’s team to help her deliver her strategic vision for our police service, ensuring her priorities are delivered and her office is providing the best possible service to the public of Merseyside.

“The safety of our families and neighbourhoods is of utmost importance to us all.  So, it is a privilege to take up this role working with the Commissioner, Merseyside Police and our partners to prevent crime, support victims and build stronger communities. I am looking forward to getting started.”

As Interim Chief Executive, Sue will also act as Monitoring Officer, with responsibility for the legal decisions of the Commissioner.

Sue, who is Chair of Merseyside Police’s gender equality network, joined the force in 1989 as a Communications Officer in the police control room before moving on to manage the Police National Computer (PNC) Bureau. In 1999, she became a unit manager in Criminal Justice and went on to work her way up through the department to manage 600 staff within the organisation.

Recruitment of a permanent Chief Executive will commence in October.