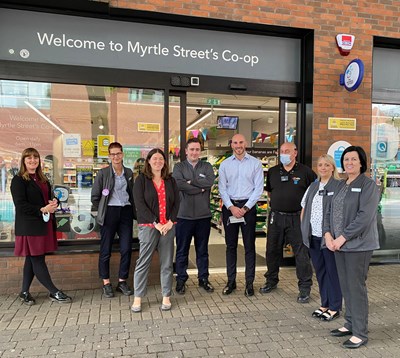 Merseyside’s new Police Commissioner has joined calls for greater protection for shopworkers across England as she met retail staff to listen to their concerns today.

New laws came into force in Scotland today (Tuesday 24th August) which make assaulting or abusing retail staff a standalone offence, but moves to bring the same protection in across the UK have so far failed.

Emily Spurrell echoed the calls of retail trade union Usdaw and the British Retail Consortium, (BRC) urging the UK government to follow the Scottish example and introduce similar protections across the rest of the UK as she met a group of staff working at the Co-op in Myrtle Street in Liverpool city centre to listen to their experiences.

Every day, more than 400 retail workers across the UK face violence, just for doing their jobs. Six of those incidents will involve a knife, and two a gun. A lot of these shops sit in the heart of the community, and these instances impact on the workers and sense of safety in the community.

According to retail trade union Usdaw, every minute of the working day during the pandemic somewhere across the country a shop worker was verbally abused, threatened with violence or physically attacked.

As high streets and shops have re-opened following the easing of Covid-19 restrictions, retail workers are once again on the frontline making it a good time to raise awareness of the issues of violence against shopworkers and the Cooperative Party’s ‘Safer Colleagues, Safer Communities’ campaign. The campaign was launched in 2018 to raise awareness of retail crime and encourage the government to do more to help combat the issue head-on.

Merseyside’s Police Commissioner Emily Spurrell said: “Shopkeepers and workers provide a vital service to our communities. That has never been more apparent than over the last 18 months, when during the pandemic they helped to keep the country running, providing essential supplies and human interaction for people who may otherwise have been isolated and struggling. Despite that, incidents of abuse and violence have continued to increase.

“Nobody should go to work fearing violence, threats or abuse. The impact of criminal attacks on these premises can be huge and have significant long-term effect on both employees and businesses.

“The Scottish government unanimously passed the Protection of Workers Act which has come into effect today, providing greater protection for shopworkers and introducing tougher sentences for perpetrators.

“Ministers in Westminster need to follow their example and I support the calls from Usdaw and many others to provide the same protection for retail staff across England by amending the Policing Bill when it goes back to the House of Lords in September. It was deeply disappointing that ministers failed to approve a clause to include it back in July.

“I want business owners and shop workers to know that I am on their side and their voices are being heard. I was delighted to meet staff from the Co-op today to listen to their concerns. Tackling retail crime and protecting shopworkers will be among the priorities in my new Police and Crime Plan, so today’s conversation will be vital in helping to inform my work going forward.”