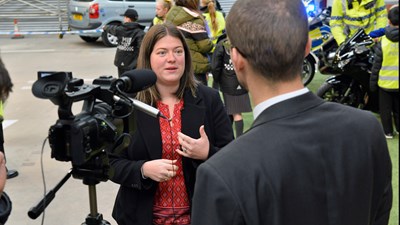 An independent report urging for a fundamental culture shift in the way the police and Crown Prosecution Service (CPS) work together on rape cases has been welcomed by Merseyside’s Police Commissioner.

The joint report released by Her Majesty’s Inspectorate of Constabulary and Fire and Rescues Services (HMICFRS) and HM Crown Prosecution Service Inspectorate (HMCPSI) has highlighted evidence of ineffective joint working between police and prosecutors which has contributed to lengthy delays in decision-making, poor outcomes and unacceptably poor communication with victims.

Responding to the report, the Police Commissioner Emily Spurrell said: “This is the second report released in just a week by the inspectorate which highlights that drastic change is urgently needed if we are to give victims of sexual violence the justice they deserve.

“Sadly, the finding from this report comes as little surprise. The number of rape victims who get justice through the criminal justice process remains pitifully low. I welcome the recommendations detailed by inspectors which urge for an urgent step-change in the way police and prosecutors work together to investigate these appalling crimes and calls for greater wrap-around care for those who report rape.

“It is clear from this report that at a national-level both organisations need to address underlying issues and tensions and eradicate the ‘blame culture’ found by inspectors.

“This is not a quick fix. We need fundamental change, backed up by robust, sustained funding if we are to make genuine changes and secure justice for those subjected to this horrific crime.

“I am committed to improving the care, support and outcomes for rape victims and I have already had discussions with the Chief Constable about the way offences are investigated here in Merseyside.

“I am reassured that Merseyside Police carried out its own detailed internal review into rape investigations last year and, as result, produced a significant number of recommendations for improvements, many of which they are already acting upon. It is clear the recommendations from this self-inspection reflect the findings contained within the report released today, so it is encouraging that action is already being taken. The Force’s decision to initiate a further review to focus on any additional recommendations made by inspectors is further demonstration of their commitment to continually learning and improving.

“I will closely monitor the Force’s progress against these action plans through my quarterly, public Force Inspection meetings. I will also examine what wider improvements can be made within the criminal justice system through the Merseyside Criminal Justice Board as this report raises some clear recommendations for the CPS to improve the effectiveness of their approach and processes, and communicate with victims better to keep them updated on their cases. I welcome calls from inspectors for the CPS to provide more information to the public about how they deal with cases of rape and I will challenge for this to be adopted in Merseyside.

“I will study this report, as well as phase 2 of this inspection, closely to inform the work we are doing to address this issue here in Merseyside.

“The personal accounts provided by rape survivors of their experiences of the criminal justice process makes for difficult reading. They also act as a striking reminder why we must urgently strive to do better.

“It is clear from their accounts the difference the support of a trained Independent Sexual Violence Advocate (ISVA) can make. Our ISVA service has been chronically underfunded for years and is desperately strained, with some advocates trying to provide support for up to 75 survivors at any one time.

“While I was pleased to secured additional funding for three extra ISVAs back in May, we urgently need much greater funding to be provided year on year.  These reports make it abundantly clear that it is high time the Government commits to a strong funding package to support services and improve the response in the long term and this is what I will lobby for as Merseyside’s Police Commissioner.

“It is crucial we continue to listen to the voice of survivors if we are to ensure victims get the right response at the right time. I am committed to setting up a victims’ panel to ensure survivors can continue to be at the heart of this process.”