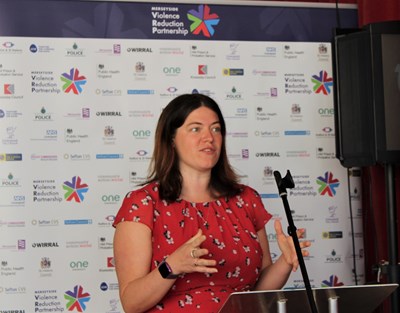 More than £5.8m of funding will enable the vital work of the Merseyside Violence Reduction Unit (MVRP) to continue for the next 3 years, reducing serious violence in our region, and for future generations.

Announced by Home Secretary Priti Patel, the MVRP received their share of £130 million dedicated to reducing serious violence, after it was revealed that 49,000 crimes in England and Wales had been prevented since the inception of Violence Reduction Units in 2019.

As many of the MVRP programmes rely on getting to the roots of adverse childhood experiences and offending by forming trusting relationships with families and communities, the longevity of the support will prove crucial. Aside from their Gloves Up programme, celebrated by Government this morning for getting young people active, engaged and eventually into work, the Programme runs a myriad of initiatives from pre-birth to mid-20’s. They include Reading to the Bump, where participants are encouraged to communicate with their unborn child!

Run in three Merseyside hospitals including Alder Hey, the Navigators programme meanwhile, is typical of their early intervention public health approach. Here, medics report injuries that may have resulted from violence to young people, to specially trained youth workers. That team then begin to form a relationship with the patient, their family and even their school, to get to the nub of any trauma and help the young person rebuild their life.

Merseyside’s Police Commissioner Emily Spurrell said: “It’s very welcome news that the funding for Merseyside’s fantastic Violence Reduction Partnership (VRP) has not only been renewed, but crucially has been guaranteed for the next three years.

“Alongside many others, I have repeated called for the Government to provide multi-year funding for this important partnership and it’s a great relief they have finally taken notice.

“There are still too many people in Merseyside whose lives have been touched by serious violence, and sadly we know in many cases something could have been done to prevent it.

“The root causes of serious violence are complex and deep-seated. There are no quick fixes, but with funding now secured until at least April 2025, our VRP will have much greater security and flexibility to fund prolonged, sustainable initiatives which can get the best results by reaching vulnerable young people at the earliest opportunity to genuinely break the cycle of crime.

“This announcement is testament to the effectiveness of this very valuable partnership during its first three years in operation and I’d like to thank the team, our cross-sector partners and all the organisations who have created, developed and delivered its trail-blazing programmes so far. I look forward to building on this work over the next three years as we continue to build a brighter future for our young people and deliver lasting change for communities across Merseyside.

“I will also continue to lobby Government to give us the funding to replace our missing 456 police officers to ensure we have more feet on the beat keeping people safe every day.”

Detective Superintendent Siobhan Gainer, Head of the MVRP concluded: “Our team is made up of emergency services, early years, local authority, DWP and public health professionals who have all felt the frustration of seeing past programmes halted, just as they were making a difference.

Although it is extremely encouraging to hear that VRUs have already reduced crime, we believe the real difference will be felt by generations to come, as we alter attitudes and responses to trauma and help young people realise their life goals and feel fulfilled and in control. Today, that dream has become far more realistic as we commence on a three-year journey towards total violence reduction.”

Funded by the Merseyside Violence Reduction Partnership, Weapons Down Gloves Up is an initiative that aims to improve the life chances of young people out of education or work, by engaging them through the discipline of boxing and moving them on to career prospects in civil engineering.

Danny was 17, spending time on the streets and involved in drugs and weapon crime, when he found out about the Weapons Down Gloves Up project. He thought it was too good to be true. But, after some setbacks, Danny said "what the young community needs to do is sacrifice 7 weeks and show pure determination to end up like myself, who left this course with 6 qualifications and a lifetime job opportunity that will be able to support my future family well into the future."