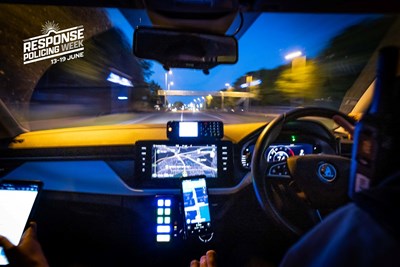 This week, Merseyside Police and the Police Commissioner are joining police forces across the country to highlight the work of response police officers and the vital part they play in UK policing.

It is officers in Emergency Incident Response Team that attend the wide variety of 999 calls that are received every day in Merseyside. For most members of the public, response officers are what come to mind when they think of the police.

When response officers arrive at work each day, they never know what situations they will face. They must be prepared to deal with anything from being the first at the scene of what will become a complex investigation or a life-endangering emergency, to diffusing confrontational situations or showing the utmost compassion in upsetting circumstances.

It’s the second year that the national Response Policing Wellbeing and Resilience Week of Action has been organised, an initiative started by the National Police Chiefs’ Council. The week of action aims to recognise the work of response police officers, with special emphasis on wellbeing, making officers aware of the resources available to them that can help to address important issues such as fatigue and resilience.

The response policing role can be physically, mentally, and emotionally demanding. This national week of action boosts the wellbeing and resilience support services, provided throughout the year by our Occupational Health Unit, with access to a range of initiatives from the force and Oscar Kilo, the National Police Wellbeing Service.

Response officers can access a range of wellbeing initiatives specially designed for their needs. They will have access to webinars and training that will provide tips and techniques on building resilience, managing stress, sleeping well, and overcoming fatigue.

Chief Superintendent Mark Wiggins, Head of Response and Resolution at Merseyside Police, said: “I have spent my whole career in frontline operational roles at all ranks and I know just how demanding the job is. Response officers play a crucial role in protecting and serving our communities, and these officers routinely deal with some of the most challenging situations in society.

“They are frequently the first at the scene of an incident, and they are often the first and only contact that many people will ever have with the police. For most victims of crime in Merseyside, our response officers will be the first face they see in their moment of need, the first hand they hold when sad news is delivered and the first voice they hear when shock means nothing else is sinking in. However, there is also a lot of satisfaction from the role in helping vulnerable people, finding someone who is missing or arresting an offender caught in the act of committing an offence.

“It is only right that our officers feel supported in the work they do, and the aim of the week of action is for the work of response officers to be recognised and for them to know that their wellbeing is important and to understand how and where to seek support when it is needed.”

Merseyside’s Police Commissioner Emily Spurrell said: “National Response Policing Week is an important date in my calendar because it gives me the opportunity to recognise and say thank you to the officers on the frontline serving the communities of Merseyside when they are in greatest need.

“As Police Commissioner, I am fortunate to attend commendation ceremonies where I hear amazing accounts of bravery and selflessness.

“Response officers are the ones who day in, day out, face the most challenging and difficult situations – situations which often put their own safety in jeopardy and can affect their own wellbeing. They are also very often those who are first at the scene of a crime and play a vital role supporting people when they are at their most vulnerable and traumatised.

“This can take a toll on the person wearing that uniform, and it is critical that while we appreciate the amazing work they do, we make sure they have the support they need to do this incredibly demanding job.”

On Thursday 16 June, follow the Merseyside Police social media channels to watch a video series named “The Ride-along”, which will provide a fascinating insight into the experiences of our response officers.