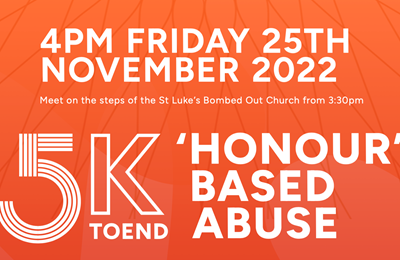 Merseyside's Police Commissioner will be joining the 5k to end 'Honour' Based Abuse campaign led by her Victim Care Merseyside partner Savera UK.

March with Savera UK through Liverpool city centre in protest against ‘honour’-based abuse (HBA) and harmful practices. Stand in solidarity with survivors of HBA, female genital mutilation (FGM), forced marriage and child marriage and remember those who have been lost.

The march also marks the launch of Savera UK’s first-ever fundraising campaign, which encourages people to take on a personal 5K challenge, between Friday, 25th November and Saturday 10th December 2022 in memory of the 5,000 people lost each year due to ‘honour’-based abuse (#5KForTheFiveThousand).

Where: Meet on the steps of St Luke’s Bombed-Out Church from 3:30pm. Speeches start at 4pm

Following the march, we will be going to Derby Square to join the vigil for those lost to domestic violence and abuse, which starts at 5:30pm.