Road traffic victims to be remembered at poignant Liverpool service 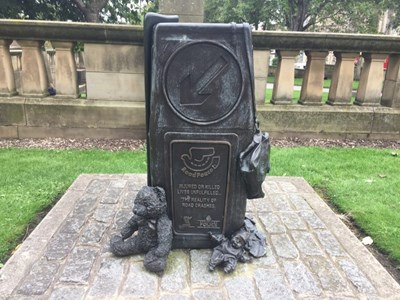 A special service will take place in Liverpool on Sunday (20 November) to remember road crash victims.

Taking place in St George’s Hall’s Concert Room at 1.30pm, those who have been bereaved or injured as a result of a road crash are invited to attend the moving ceremony to mark World Day of Remembrance for Road Traffic Victims.

It will culminate in five doves being released at the memorial to road crash victims in St. John’s Gardens behind St George’s Hall at 2.30pm. The doves are released in memory of the five people on average who die every day on the roads of this country.

Following the service there will be light refreshments and the opportunity to talk to others in the hall. During the service, tributes will be paid to loved ones who have died in road crashes.

Pauline Fielding MBE, from Liverpool, organises the annual event for RoadPeace, – an organisation she turned to for support after her son Andrew was killed in 1994, at the age of just 18 years, in a crash caused by a driver who did not stay at the scene and who was never traced.

Pauline is now a trustee of the charity and coordinates NW activities. She says the service is a poignant way for people to pay tribute as well as raising awareness of how dangerous driving costs lives.

Pauline said: “We invite all who have been bereaved or injured through road crashes, together with those who wish to support them, to join us for this special remembrance. In every death there are so many people affected and this service offers families and friends of those who have died or been injured the opportunity to come together and remember their loved ones.

“It is also a chance for us to give thanks to the emergency services for their support and to highlight this unacceptable death toll and reflect on what can be done to prevent further tragedies.”

Lord Mayor of Liverpool, Councillor Roy Gladden, said: “Each year at this time, our city can come together and remember those who have had their lives cut tragically short as a result of being involved in a road crash.

“It gives us the opportunity to stand in solidarity with the family and friends of these victims who grieve every day for the loss of their loved one. It will be an incredibly moving event of both reflection and raising awareness of how dangerous driving can cost lives.”

Emily Spurrell, Merseyside’s Police and Crime Commissioner said: “RoadPeace’s annual service of remembrance is a poignant opportunity to remember those who have lost their lives through road traffic crashes and their loved ones.

“So many people are affected by each and every death and it is vital that as a community we show they are in our thoughts and that support is always available.

“This annual service also acts as a stark reminder that we must continue to do everything possible to prevent other families from experiencing the same pain and suffering.”

Road deaths and injuries are sudden, violent and traumatic events, often with a lifelong and life-changing impact.

A strategy has been developed by Merseyside Road Safety Partnership to reduce the number of people killed or seriously injured on the roads of Merseyside. It reflects the ambitions of the partnership and promotes the following strategic outcomes for road safety:

Department for Transport statistics show there were 128,209 casualties on Britain’s roads and 1,558 deaths in 2021.

Road traffic injury is the leading cause of death for children and young people between five and 29, WHO statistics show.

Each year, millions of newly injured and bereaved people from every corner of the world are added to the countless millions already suffering as the result of a road crash.

The response to road death and injury and to victims and families is often inadequate, unsympathetic, and inappropriate to the loss of life or quality of life.  RoadPeace exists to support people whose lives have been tragically affected by road crashes, and to campaign to improve the systematic response to crashes in the UK.

Brigitte Chaudhry MBE, RoadPeace Founder and WDR initiator, whose son Mansoor was tragically killed in a crash in 1990, said: “I am proud to have had a major part in the creation and evolution of the World Day to the present day.

“It has been wonderful to witness the spread of World Day commemorations throughout the world and to know that we victims are linked with each other on that special day in remembering our loved ones.

“We hope that raising awareness of the terrible consequences of crashes among all road safety stakeholders, governments and the general public will lead to a serious reduction of road danger and hence future deaths and injuries.

“We hope that thanks to the existence of our World Day we will have to remember fewer new road victims each year.”