Alongside Victim Care Merseyside, the Police Commissioner supports victims through the use of restorative justice.

Becoming a victim of crime is often a traumatic experience. Many victims feel that their life has been turned upside down, and what was once normal and familiar no longer feels safe.

Whilst the criminal justice process deals with the offence, it can sometimes leave those harmed feeling out of control and in need of answers that simply cannot be provided during the formal process.

Restorative Justice can change this.

Restorative justice brings together people harmed by crime or conflict with those responsible for the harm, to find a positive way forward.

Restorative justice gives victims a chance to explain to offenders the real impact of their crime, to get answers to their questions. It allows victims to ask 'why me?' and provides them with the opportunity to challenge the offender’s behaviour. 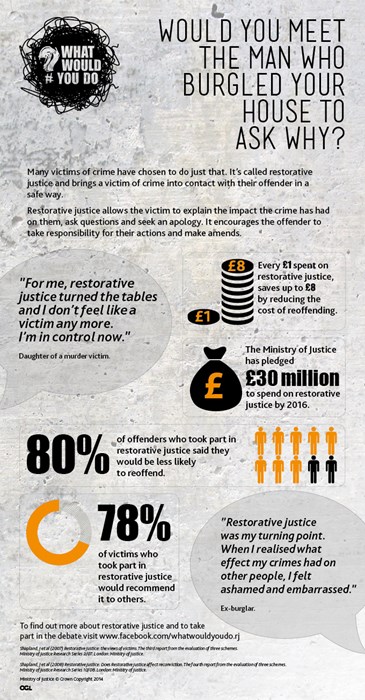 It empowers victims, giving them the opportunity to meet or communicate with their offenders in a safe environment to have their say.

It also holds offenders to account for what they have done and helps them to take responsibility and make amends, it can help to stop reoffending.

For victims, meeting the person who has harmed them can be a huge step in moving forward and recovering from that crime.

Restorative justice is not a ‘soft option’. Meetings between victim and offender can be very powerful and have a huge impact on victim recovery.

For any kind of communication to take place the offender must have admitted to the crime, and both victim and offender must be willing to participate.

Benefits of restorative justice include restoring victim’s confidence, to allow them to cope and recover from what can often be a horrendous life changing incident.

How does restorative justice work?

Restorative justice is entirely voluntary, and you are free to withdraw at any time.

Facilitators help people taking part in restorative justice and are there to make sure the process is safe.

Meeting an offender face to face is one option, but the facilitator could also arrange for a victim of crime and an offender to communicate via letters, recorded interviews or video.

When is Restorative Justice used?

Restorative justice can be used for any type of crime and at any stage of the criminal justice system, including alongside a prison sentence.

Restorative Justice can only be used when the offender accepts responsibility for the crime and the victim agrees to a restorative approach. Victim participation is always voluntary, based entirely on the victim’s informed choice and delivered at a pace to suit the individual. Restorative Justice is not a soft option – for many offenders, facing up to their actions is very difficult.

For some people who have been affected by crime it helps them to explore why the crime happened. Evidence shows that most people who take part in a Restorative Justice process come away feeling satisfied because it has allowed them to have their say.

It also helps people to move on and to feel less fearful of crime in the future.

Studies on restorative justice have highlighted:

How restorative justice can help?

Emma's** brother Dean** was stabbed 18 times at a house party. He died half an hour later on the kitchen floor.

Emma struggled for years to come to terms with his death, but eventually Restorative Justice helped her move on with her life.

**Names have been changed to protect identities

I want to find out more about Restorative Justice in Merseyside

If you had a chance to meet the person who committed a crime against you, what would you do?

Watch the video below for an introduction to Restorative Justice: