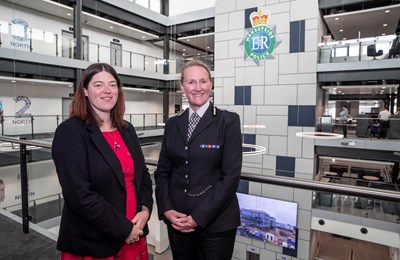 The Police Commissioner and the Chief Constable will host a special public meeting today at which Merseyside Police’s budget for 2022/23 will be set and approved.

The budget report is one of the most important documents the Police Commissioner, Emily Spurrell, has to consider during the course of the year.

The final budget report for 2022/23 is produced after the Commissioner presented her proposals for the police precept and to balance the budget to the body which scrutinises her work, the Police and Crime Panel. At this meeting earlier this month, Panel members unanimously endorsed Emily’s plans to help Merseyside Police rebuild after a decade of austerity.

With careful planning, the Commissioner and Chief Constable have been able to accelerate the Force’s recruitment drive over the last two years to bring 665 new officers into the force and out on to the streets of Merseyside – well ahead of Government targets.

By setting a balanced the budget, the Commissioner will be able to protect police staff and PCSO jobs for the year ahead.

The meeting will be held at 11am on Tuesday 22nd February 2022 at the Office of the Police and Crime Commissioner at the Mather Avenue Training Centre in Liverpool.

Merseyside’s Police Commissioner Emily Spurrell said: “Setting a balanced budget is one of my most important responsibilities.

“I was elected on a clear mandate to help Merseyside Police grow and rebuild after a decade of devastating cuts and that is what I am focused on delivering.

“By passing this budget, supported by some careful financial saving and planning over the year ahead, we can maintain the 665 new officers we’ve recruited in the last two years and protect police staff and PCSOs jobs, while putting the force in the best possible position to keep our communities safe in the year ahead.

“There are still going to be challenges ahead – this budget includes £3m of cuts to be made in the next 12 months and we estimate a further £13.7m of savings will have to be found by 2026/27.

“Despite our hard work to rebuild Merseyside Police, we remain 456 officers short of the number we had back in 2010 and I will do everything possible to lobby Ministers to provide the funding for those missing officers.

“Setting a balanced budget is no easy task with the challenges ahead, so I welcome anyone who is interested in finding out more about Merseyside Police’s budget to attend this meeting.”

Anyone wishing to observe this meeting, must register their interest in advance by emailing [email protected]

Please find all the reports which will be discussed at this meeting on our Budget Reports page.