Cutting crime and making our communities safer is a priority for us all.

Police and Crime Commissioners are required to produce a Police and Crime Plan setting out their policing and crime priorities for the region within 12 months of being elected.

It sets out her three key priority areas. They are: 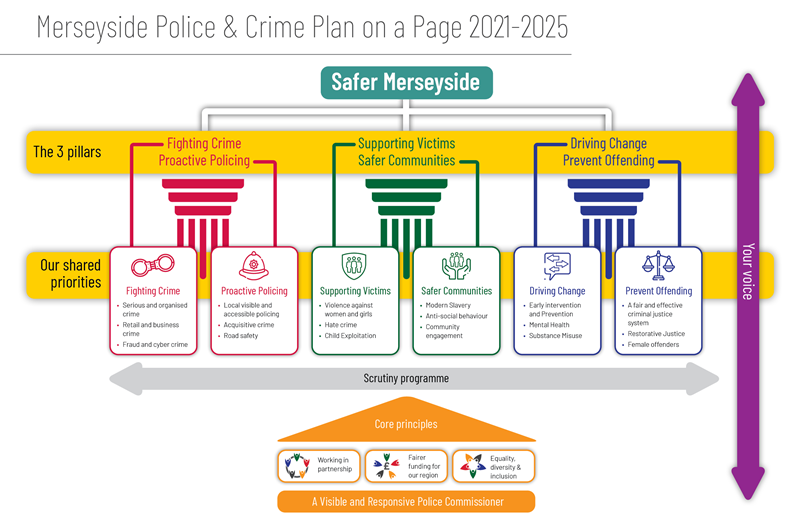 You can find out more about each priority, and see the most recent Police and Crime Panel reports on each of them below as they are released:

Fighting crime and proactive, visible policing is a major priority for the people of Merseyside and it remains at the core of daily business for Merseyside Police.

The PCC is committed to supporting the force as it continues to focus on preventing and fighting crime, particularly serious and organised crime, violence, retail and business crime and fraud.

She also is determined to working with the Chief Constable to ensure Merseyside Police continues to provide a local, visible police presence, that acquisitive crime such as burglary and robbery is targeted and that our roads are made safer.

Every person living and working in Merseyside has the right to feel safe and protected by the law, particularly within their home, their street and their local community. This right also extends to those who come to the region as visitors.

Building safer communities and supporting anyone affected by crime, particularly those subjected to horrific crimes including Violence against Women and Girls (VAWG), hate crime and the exploitation of children, will be at the heart of the Police Commissioner's work.

She is committed to ensuring that victims of crime receive the best possible service from Merseyside Police, and from the many services which support victims of crime. She will also work with partners to address the issues which cause most damage in our communities, such as modern slavery and ASB.

The best way to prevent crime is to stop it happening in the first place.

That's why the Commissioner is committed to focusing her efforts on diverting individuals, particularly vulnerable young people, from getting drawn into a life of crime.

By intervening early and tackling the underlying factors that can drive people into criminality we can forge stronger, safer communities.